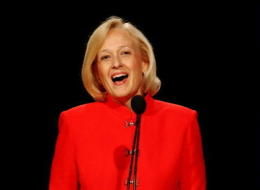 PBS chief Paula Kerger told TV critics Wednesday she did not regret airing “Turmoil & Triumph: The George Shultz Years” and the kerfuffle that arose over its funding does not highlight the difficulties PBS faces as it trolls non-stop for funding in a lousy economy. That was in response to a question put to her at Summer TV Press Tour 2010 by a TV critic who seemed to be trying to offer her some sort of out for having put on the controversial documentary about former Reagan-era Secretary of State George P. Shultz. “Turmoil and Triumph: The George Shultz Years,” which aired last month, was produced for PBS by Free to Choose Media, a non-profit production company that says it focuses on “issues of personal, economic and political freedom.” Before it even aired, questions were raised about the three-hour project, over some of the funding. Among the funders, according to PBS ombudsman Mike Getler, was the Stephen Bechtel Fund, an arm of the firm that Shultz once headed and also served on the board of directors. Another funder was Charles Schwab, founder of the investment firm where Shultz served as a board member. Also contributing was Peter G. Peterson, the businessman and fiscal conservative who was a Nixon administration cabinet colleague of Shultz’s and whose wife is one of the founders of the Children’s Television Workshop, which has ties to PBS, Getler noted. “It was funded by lots of different funders… If you look at the full funding list there was not any single entity that directed the documentary,” Kerger told critics Wednesday at the Beverly Hills Hilton hotel. She might have been reading from PBS’s statement issued when the controversy erupted, in which it said the broadcasting service “believes it fully meets our standards” and that its Program Underwriting Policy staff had examined the funding of this program and found that everything was hunky dunky because: * there were a total of 13 funders, * no single funder accounted for more than 25% of the budget; and * the subject matter of the program focused on Shultz’s tenure as secretary of state under Reagan. But the group known as FAIR (Fairness & Accuracy In Reporting), which has a “progressive” approach to media watch-dogging by its own admission — would not be comforted, spearheading the campaign to flood PBS and Getler with letters of protest. PBS said “It was determined that Shultz’s role in the Bechtel Corporation — which is disclosed in the program — did not preclude funding from the related family foundation under the circumstances since subject matter of the program was Shultz’s role as Secretary of State in the Reagan administration, not his role in the corporation.” David deVries, the producer-writer-director of the project, wrote a rebuttal “to the sneering, scurrilous accusations of prejudice and partiality about the shows.” Among those who took issue were Getler, who wrote last month, “this series, for me, as a viewer and an ombudsman, created at least the appearance of a conflict of interest; a portrait so glowing that it overwhelms whatever modestly critical elements are included, that does not easily fit the designation one usually associates with a documentary, and that is indeed funded in part by associates of the subject. “It doesn’t mean that funders exerted any editorial influence, but it left me feeling they didn’t have to.” http://voices.washingtonpost.com/tvblog/2010/08/pbs-chief-paula-kerger-told.html