Raymond Davis was a CIA contractor at the time of his arrest. But the Obama administration was not forthcoming initially and described him as a “diplomat,” an implausible denial given the munitions found in his possession – what was the administration hiding? Davis was heavily armed, killed the two Pakistani agents tailing him. His camera’s memory card, seized by police, stored photographs of government installations in Pakistan …  If it was the States, the same evidence would be perceived by the FBI and talk radio nabobs as a prelude to terrorism …

Pakistani and U.S. authorities say U.S. Embassy worker Raymond Davis, who killed two alleged robbers in Lahore, works for the CIA. U.S. officials describe him as a contractor with the agency and insist he has diplomatic immunity and should be freed. … Items found in Davis’ Honda Civic after his arrest: a Glock 9-millimeter handgun, 75 rounds of ammunition, a global positioning system device, bolt cutters, a survival kit and a satellite phone. When police looked through the digital camera found in Davis’ car, they discovered photos of Pakistani government installations near the Indian border. … http://www.latimes.com/news/nationworld/world/la-fg-pakistan-cia-20110222,0,7234338.story

Davis is a CIA agent, no doubt: Pak intel official 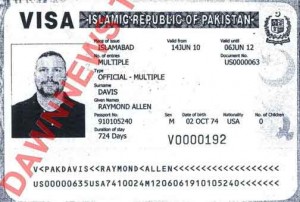 LONDON/ISLAMABAD: US official Raymond Davis, arrested on charges of gunning down two men in Lahore, is a CIA agent, a media report said. The Guardian said based on interviews in the US and Pakistan, it can confirm that Davis, a former special forces soldier is employed by the CIA. It quoted a senior Pakistani intelligence official as saying that “it’s beyond a shadow of doubt” . This may complicate US efforts to seek the release of Davis, who claims to have fired in self-defence when the two attempted to rob him. The 37-year-old Davis has been charged with murder. He shot at two men who had pulled up in front of his car at a traffic signal on January 25. In Islamabad, Pakistan PM Yousuf Raza Gilani said his government would deal with the matter without compromising national interests. “You should not be worried . There is a responsible government and it is working in the country’s interest,” he said when asked by reporters about Davis being a CIA operative . Davis was engaged in espionage and surveillance activities and was on a mission when the incident happened, claimed Punjab’s law minister Rana Sanaullah. Davis is now lodged in a Lahore jail where additional security forces have been deployed . Obama administration has demanded the release of Davis contending that he is an “administrative and technical official” attached to its Lahore consulate and that he enjoys diplomatic immunity.
http://timesofindia.indiatimes.com/world/pakistan/Davis-is-a-CIA-agent-no-doubt-Pak-intel-official/articleshow/7544468.cms#ixzz1EeSSnzeO
Previous Article
John Birch Society Extremism Never Dies: The Fortune Behind Scott Walker’s Union-Busting Campaign
Next Article
Investigation Opened into the Nazi Murderers of Einstein’s Family