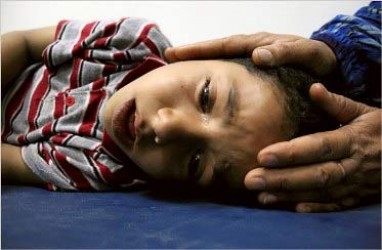 For a militarist empire, a “surge” is like heroin; the effectiveness eventually wears off, and you need another hit. Thus in the last few months, the Bush regime has been relentlessly turning up the heat on Sadr, arresting his lieutenants, killing his men, trying to goad him into breaking his ceasefire, and plunging the nation into an escalation of its ongoing civil war.

The current esclation of the Iraqi civil war – first in Basra and now all across the occupied land – seems to be a perfect dovetailing of the complementary but not identical strategic needs of the Bush Administration and its client government in Baghdad. The regime of Prime Minister Nouri al-Maliki is hoping to destroy or cripple – or outlaw – its principal political rival in the south before elections later this year. The Bush regime – which is intimately involved in every step of the Basra operations, despite its rote denials – is trying to keep the war boiling on a high simmer. This is the only option it has left to achieve its primary war aim: a permanent U.S. military presence in Iraq.

Bush (and the ever-compliant press) portray the operation as an attempt to show that the Iraqis can handle their own security problems. A successful demonstration of this in Basra would then hasten the withdrawal of (some) U.S. troops – so the story goes. But in fact, the operation seems expressly designed to prove the opposite point: that the Iraqi government can’t possibly control its own country, and thus a major U.S. presence is still needed.

This is why the White House has backed al-Maliki’s assault on the strongholds of Moqtada al-Sadr in Basra. But to say that Bush has “backed” or assisted this major escalation of the Iraqi civil war is probably putting it too mildly. As the operation unravels into the inevitable blood-drenched fiasco – exposing the Iraqi “government” as the weak, corrupt, ineffectual, infiltrated puppet show that it has always been – it becomes more and more likely that al-Maliki was ordered to launch the attack by his masters in Washington – or at the very least was “marshall’d in the way he was going” by the Americans, with Bush playing Lady Macbeth to the power-hungry but uncertain al-Maliki.

In any case, the escalation of the civil war was obviously a spectacular miscalculation on the Iraqi government’s part; far from crushing Sadr’s forces, it has roused them to fury, and spawned violent uprisings and mass civil disobedience around the country. It now threatens to shut down or greatly hamper operations of the nation’s one relatively trouble-free outlet for exporting its oil. It has further destabilized the capital, which is now locked down under a curfew, while mortars and missiles rain down on the Green Zone. The Americans and Iraqi government forces have sealed off Sadr strongholds in Baghdad and Basra, cutting off access to food, medicine and other necessities to millions of people. As Patrick Cockburn reports:

Instead of being a show of strength, the government’s stalled assault is demonstrating its shaky authority over much of Baghdad and southern Iraq. As the situation spins out of Mr Maliki’s control, saboteurs blew up one of the two main oil export pipelines near Basra, cutting by a third crude exports from the oilfields around the city….

In Baghdad, tens of thousands of supporters of Mr Sadr, whose base of support is the Shia poor, marched through the streets shouting slogans demanding that Mr Maliki’s government be overthrown. “We demand the downfall of the Maliki government,” said one of the marchers, Hussein Abu Ali. “It does not represent the people. It represents Bush and Cheney.”

The main bastion of the Sadrist movement is impoverished Sadr City, which has a population of two million and is almost a twin city to Baghdad. The densely packed slum has been sealed off by US troops. “We are trapped in our homes with no water or electricity since yesterday,” said a resident called Mohammed. “We can’t bathe our children or wash our clothes.”

Cockburn notes another telling example of how the civil war escalation has revealed the weakness of the Iraqi government and the manifest failure of the “surge” to accomplish its ostensible goal of bringing security and stability to Baghdad:

In a further blow to the belief that the surge has restored law and order, one of the two Iraqi spokesmen for the Baghdad security plan, which is at the heart of the surge strategy, was kidnapped and three of his bodyguards killed before his house was set on fire. The victim was Tahseen Sheikhly, a Sunni who often appeared with American officials to proclaim the success of the surge.

All of this, George W. Bush said on Thursday, is “normalcy.” Glenn Greenwald noted that a conference of war whores at the American Enterprise Institute had on Monday declared that “the civil war in Iraq is over.” This was of course the usual fatuous self-delusion of these bloodthirsty cowards, but at least it was uttered before the civil war surge began. Bush, on the other hand, made his lunatic declaration even as an American civilian worker was being killed by shellfire in the “impregnable” Green Zone fortress and long after it was clear that Iraq is undergoing yet another major convulsion of violence and destruction. (Curiously, although the New York Times quoted Bush’s speech, it omitted any reference to his “normalcy” remark. It fell to the estimable McClatchy Newspapers to point this out.)

But if the civil war surge has been a disaster for al-Maliki’s strategic hopes, it has been – yet again – a triumph for Bush. The whole point of the overall “surge” he launched in January 2007 was to keep the war going, at all costs. The “surge” accelerated the “ethnic cleansing” of Iraq, as Bush bought off some Sunni insurgents and gave these violent sectarians control of their own enclaves, while simultaneously assisting the Shiite militias under the control of the government to “cleanse” their own enclaves and fiefdoms. The Sadr movement – by far the largest single political force in the country – declared a unilateral ceasefire, using the “surge” as a time to regroup, re-arm, consolidate, and prepare for the inevitable conflict with its Shiite enemies in the government, and the Sunni militias now armed and funded by the Americans.

This relative abatement of conflict brought the death tolls of Iraqi civilians and American soldiers down to still-horrific levels, but allowed the Bush regime (and again, that compliant media) to “catapult the propaganda” of “progress” in the shattered, raped and looted land. This PR manipulation muted anti-war sentiment (such as it was) in the American Establishment, especially among the Democrats, who – torn between the war-weary voters who put them into office and their real masters in the boardrooms of the military-corporate complex – were obviously desperate to latch on to anything that would save them from having to actually do something to end the war. All of this bought Bush more time to entrench the American presence still deeper, with more troops, and the constant expansion and solidifying of gigantic military bases around the country.

This was the only aim of the surge: to lower death counts enough to tamp down domestic criticism while expanding and deepening America’s military presence in Iraq. It had nothing to do with the security, freedom, prosperity or well-being of the Iraqi people, all of which has continued to deteroriate generally throughout the “surge.”

But for a militarist empire, a “surge” is like heroin; the effectiveness eventually wears off, and you need another hit. Thus in the last few months, the Bush regime has been slowly and relentlessly turning up the heat on Sadr, arresting his lieutenants, killing his men, trying in every way to goad him into breaking his ceasefire, and plunging the nation into an escalation of its ongoing civil war.

For it is obvious now, even to the Bush Regime, that any legitimate Iraqi government would have to ask U.S. forces to leave the country. This is the wish of the overwhelming majority of Iraqis, as shown in poll after poll, year after year. The only way the Bushists can ensure a permanent military presence in Iraq – which has been the open aim of the Faction for many years, long before Bush launched his act of aggression in 2003, and long before 9/11 “changed everything” – is by keeping a puppet government in office through force of American arms. And the only way to do that is to provoke and attack all the forces opposed to that illegitimate government.

This is a win-win situation for Bush and the militarists, as we have often noted here before. If in the highly unlikely event that the Americans and their puppet government manage to rout all the armed opposition in the country, why then, the militarists will have what they’ve always wanted in Iraq: a client state that will “welcome” a large-scale U.S. military presence. If, on the other hand, the various “surge” injections result in continuing civil war, an increase in terrorism, and general mayhem, chaos and instability, threatening at every moment to spill over Iraq’s borders and destabilize the entire region, why then, American forces will have to stay in Iraq indefinitely, to provide “regional security,” to keep training Iraqi forces to “protect” their people, to “fight terrorism” spawned by the chaos and conflict, etc. 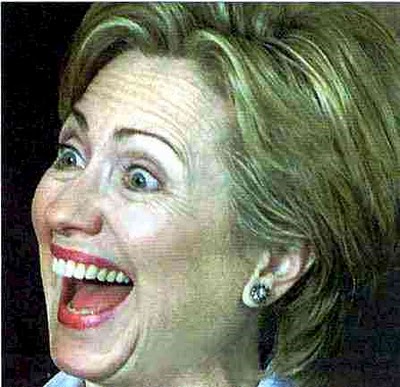 The latter, of course, is precisely the “anti-war” plan proposed by both Barack Obama and Hillary Clinton. Neither of them have proposed a total withdrawal of American forces; both have acknowledged that even the tepid plans they are now promoting could well have to be changed – or abandoned – as a result of “events on the ground” in Iraq. We are seeing those plan-changing events unfold before our eyes right now. The Bush regime has succeeded in fomenting a permanant civil war in Iraq by arming most of the players; radicalizing the populace with continual bombing raids on residential areas, holding thousands of Iraqi civilians captive without charges or due process, and supporting an illegitimate and unpopular Baghdad regime that uses torture, murder and repression as its tools (thus guaranteeing more terrorism); provoking Sadr into an open fight which neither he nor the government can win outright but which will cripple the Iraqi economy and cause mass suffering and even more violent division among the Iraqi people.

Thus, given the demonstrated gutlessness of Obama, Clinton and the Democrats on the war in Iraq, it is plain that this abomination will go on and on. The only possible move that could even potentially defuse the situation at this point is the total withdrawal of American forces. This could, perhaps, compel the various Iraqi factions to come to some accomodation. It is unlikely that such an accomodation would be reached without bloodshed; but blood is being shed copiously now. And as along as the American presence remains, as an artificial, alien – and ever-aggravating – factor, skewing the playing field, taking sides, killing people, and serving as a focus and fomenter of nationalist rage (and a handy pretext for avoiding accomodation), the situation will only grow worse. And certainly no other possible resolution – internal negotiation, a UN or pan-Arab peacekeeping force, etc. – will ever be possible as long as American forces remain in Iraq.

But let us be clear. The withdrawal of American forces from Iraq is not a “good” solution. It will lead to blood and suffering. But there are no good solutions to what Bush and his willing executioners in Congress, the media and Establishment have wrought in Iraq. There were never any “good” solutions. All hope, all potential for a “good” solution evaporated in the very instant that the first bomb fell on March 19, 2003. From that moment, the only thing – the only thing – that one could hope for and work for has been some kind of mitigation of the murderous consequences of this abominable crime.