Operation Gladio in Turkey, 2010: The Ergenekon Military "Suicides" and the CIA - The Constantine Report
0 SHARES

American Terrorism » Operation Gladio in Turkey, 2010: The Ergenekon Military "Suicides" and the CIA

Operation Gladio in Turkey, 2010: The Ergenekon Military "Suicides" and the CIA 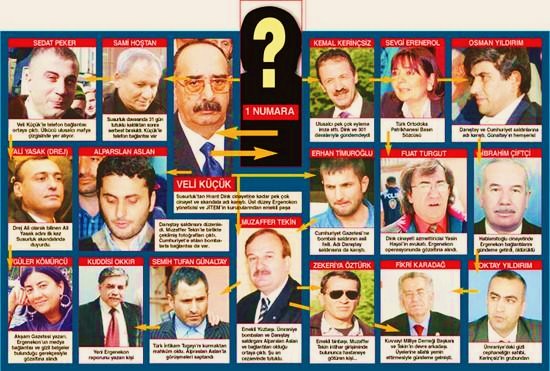 Today's Zaman, an English-only newspaper in Turkey, reported on February 10 that a rash of "suspicious suicides" - implying emphatically that these were really political murders - had claimed the lives of a seven military officers recently. Note the reference to a shadowy organization known as "Ergenekon": "... Several members of the Turkish Armed Forces (TSK) have recently died in suspicious suicides, brought back into the spotlight late last year after Lt. Col. Ali Tatar was found dead in his İstanbul home. Tatar, a naval officer, reportedly shot himself in the head. The lieutenant colonel’s alleged suicide was found to be suspicious, particularly due to his suspected links to Ergenekon, a clandestine network accused of plotting to overthrow the Justice and Development Party (AK Party) government."

The latest "suicide" was a Naval officer:

A staff colonel who reportedly committed suicide on Monday afternoon in the Aegean province of İzmir is the latest in a long list of recent alleged suicides by members of the military. An investigation has been launched into the incident by the military prosecutor’s office, while his body was taken to the Council of Forensic Medicine (ATK) for an autopsy. ... Erden was the seventh naval officer to die in a suspicious suicide or accident over the past seven years. ...

Seems Turkish officers are an endangered species these days, but the circumstantial and forensic evidence do not support the facile "suicide" verdict:

Retired Col. Belgütay Varımlı also reportedly killed himself by jumping off the balcony of his apartment in İstanbul’s Kadıköy district on Nov. 20 of last year. Varımlı’s suicide aroused suspicion because he was known to be a devout Muslim and would not have condoned the idea of killing oneself since suicide is one of the biggest sins in Islam.

Capt. Olgun Vural also died in a suspicious suicide. An autopsy of Vural, who was found dead in his house on March 24, 2009, showed that the bullet’s entry wound was smaller than the exit wound. The finding strengthened suspicions that the captain may have been shot in the back by someone else.

What is "Ergenekon," and what is this killing spree all about? According to Wikipedia, Ergenekon is "located in the inaccessible valleys of the Altay Mountains ... recently given to an alleged clandestine, Kemalist ultra-nationalist organization in Turkey with ties to members of the country's military and security forces.  The group is accused of terrorism in Turkey. ... Alleged members have been indicted on charges of plotting to foment unrest, among other things by assassinating intellectuals, politicians, judges, military staff, and religious leaders, with the ultimate goal of toppling the incumbent governmentin a coup that was planned to take place in 2009. This follows allegations published in Nokta that several abortive coups with the same intent were planned a few years ago. The proximate motive behind these false flag activities is said to be to discredit the incumbent Justice and Development Party and derail Turkey's accession process to the European Union."

Ergenekon may be tucked away in the mountains, but it is a lethal terrorist organization, partially financed by drugs and rooted in the Cold War and Central Intelligence Agency. Wiki:

The first person to publicly talk about the organization was retired naval officer Erol Mütercimler, who said in 1997:

"It is above the General Staff, the MİT and the Prime Minister. There are generals, heads of police departments, and businessmen in this organization."

"Defining it as a gang is an oversimplification. What is a gang? It is the engagement of a number of people in illegal affairs. You can not define Ergenekon as a gang. It is part of a big organization. Alparslan Türkeş and [retired general] Turgut Sunalp were members of Ergenekon. ”

"As I have worked for the state for many years, I know that forming such an organization necessitates a big budget. It is not easy to establish such an organization as Ergenekon. First of all, it requires a great staff. It needs businessmen, and perhaps drug traffickers."

Mütercimler said he heard of the original organization's existence from retired general Memduh Ünlütürk, who was involved in the anti-communist Ziverbey interrogations following the 1971 coup.[27] Major general Ünlütürk told Mütercimler that Ergenekon was founded with the support of the CIA and the Pentagon. ...

The US-seeded chaos  in Turkey, many observers say, is patterned after the notorious Operation Gladio.

You have to keep in mind that Zaman newspaper ALWAYS reports news in the favor of the religious movement (especially the Gülen movement)in Turkey so to report stories from the perspective of this newspaper is a little bit subjective….

Information about a Turkish movie, very popular in Turkey, that brings up Gladio in that country:
http://en.wikipedia.org/wiki/Valley_of_the_Wolves_Gladio