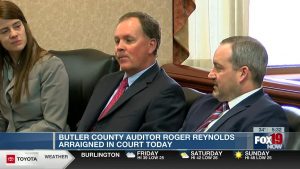 If Butler County Auditor Roger Reynolds is convicted of a felony, the Butler County Republican Party would appoint his replacement.

Reynolds won 66.5% of the vote, according to unofficial results from the Butler County Board of Elections. He received about 35,000 more votes than Democratic candidate and Oxford Township resident Mike Dalesandro.

A suburban county north of Cincinnati with about 390,234 residents, Butler County leans solidly Republican. Former president Donald Trump won the county 61% to 37% in 2020. No Democrats represent Butler County on its county commission, in Columbus, or in Washington.

Reynolds' trial starts on Dec. 12. He faces four felony charges and two misdemeanor charges. Reynolds has pleaded not guilty and said the charges are false and politically motivated.

The Butler County Sheriff's Office began investigating Reynolds in August 2021 based on complaints from West Chester resident Gerald Parks. Parks filed a lawsuit against Reynolds a month later in which he accused Reynolds of using his position as auditor to increase taxes on Parks' property and prevent its development.

If Reynolds is convicted, he would not be able to serve as auditor. Convicted felons cannot hold an office of honor, trust or profit, under Ohio law.

When the office of a county official becomes vacant for any reason, the county central committee of the political party that nominated the last official appoints a replacement, according to the Ohio Secretary of State's office. The appointee would serve until the general election in 2024, when there would be an election for the rest of the unexpired term.

Reynolds first took office in 2008 when he was appointed by the Butler County Republican Party appointed Reynolds when Kay Rogers, the previous auditor, plead guilty to bank and mail fraud and resigned.

Reynolds was endorsed by the Butler County Republican party by a vote of 60.43% after he ran unopposed in the Republican primary in May and won.

What do county auditors do?

Ohio county auditors handle county funds and records, including property appraisals and tax assessments, as well as weights and measures to inspect for pricing errors.

Turnout in Butler County for this election was 43% down from 54.1% in the last midterm election in 2018, according to results from the Butler County Board of Elections.

Erin Glynn is the watchdog reporter for Butler, Warren and Clermont counties through the Report For America program. The Enquirer needs local donors to help fund her grant-funded position. If you want to support Glynn's work, you can donate to her Report For America position at this website or email her editor Carl Weiser at cweiser@enquirer.com to find out how you can help fund her work.