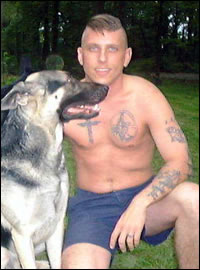 Black Flag owner Charles Juba needs to get his club up to code
Update (1:36 p.m. April 30): Charles Juba has thrown in the towel. There will be no Black Flag Club. This statement is posted on the club’s Web site: “At this time the ownership announces that The Black Flag Club will not be open for business. We thank you for your support.”

***
Tonight was supposed to be the debut of the Black Flag Club, an under-21 nightclub that’s been the center of a lot of arguing this week due to owner Charles Juba‘s ties to the white power movement. But the club will remain closed for now because it hasn’t met city codes.

During an Odessa Board of Alderman meeting last night, Juba tried to defend himself against a mob of angry people who didn’t want a neo-Nazi running a club for their kids. They got their way for now.

Odessa officials reportedly found Juba failed to properly fill out his business application and that his license has been rescinded, and the club itself still isn’t up to fire code.

Even if Juba gets all of his paperwork in line and the building up to code, Odessa still might shut him out. City leaders are considering ordinances that would allow them to regulate businesses, including one with a provision about the moral character of the owner.

Juba claims he’s a different man than the one the Southern Poverty Law Center put on it’s “40 to Watch” list in 2003. But divorce records show that just five months ago, his ex-wife feared Juba would take their children to white power rallies, and Juba requested his Nazi flag pillowcases and Ku Klux Klan robes be returned.