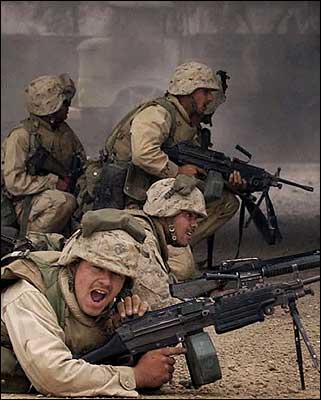 KALAMAZOO — Prospects are dim for the U.S. military to get out of Iraq anytime soon, National Public Radio foreign correspondent Deborah Amos told an audience Tuesday at Western Michigan University.

Amos, who covers Iraq for NPR, also said our focus has largely strayed from the conflict there. “The discussion of Iraq isn’t as clear as it should be,” Amos said during a talk at WMU’s Shaw Theatre.

“The economy has seized us,” she said. “We’ve forgotten about Iraq.”
Amos, who spends most of her time in the Middle East, said she was surprised to see that Iraq was ranked fifth among top issues identified by people in Florida during the presidential primary.

“Nine hundred seventy-three fatalities later … and the war is no longer the most pressing issue in the presidential campaign,” she said. “Iraqis are no closer to reconciliation than the first day we were there.”

Amos said that many Iraqis capable of transforming the country have left. “Two million people have fled Iraq,” which she described as “still in shambles.”

The NPR correspondent described witnessing Iraqis watching helplessly as neighbors get taken away by armed men. “You could get blown up by a car bomb or just disappear,” she said of dangers people there face.

Iraqis don’t anticipate the war ending for at least a decade, Amos said.

“The picture she paints is really hopeless,” Kalamazoo College Interim Provost Jan Tobochnik said Tuesday after listening to Amos. “We’re going to be in there for a long, long time.”

Max Clark, a WMU senior majoring in political science and creative writing, said he thinks it will take a catastrophe to generate more concern among Americans. “We would need either a backslide in violence or a collapse in the military,” Clark said.

Previous Article
Film Review: The Rape of Europa – How the Nazis looted Europe
Next Article
AG Mukasey Will Not Prosecute CIA’s Criminal Acts