NPR Reveals Romney Bankrolled by Big Donors, Not Small Ones

" ... Romney lags behind all of the other candidates currently in the race in the share of cash raised from small donors, an NPR analysis finds. Just 10 percent of his money comes from people giving $200 or less. ... " 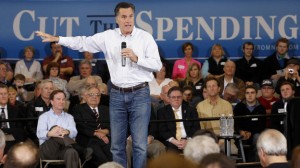 Mitt Romney had the strongest fundraising among the Republican presidential contenders last month. But a deeper look raises questions about just how strong it is in the long run.

The Romney campaign is unusually reliant on big donors — and weak on small donors.

In one sense, big donors are great. It's a lot quicker and cheaper to raise $2,500 from one person than to get $10 from 250 people. But there's a catch: $2,500 is the legal limit for donations to a candidate's campaign. Once that donor maxes out, you need to find another donor.

And that's how the Romney campaign has been raising money.

Fred Malek, one of the GOP's longtime Washington strategists and now a bundler of contributions for Romney, says he doesn't see it as a problem at all. Of course you ask a big donor to keep helping, he says.

"It's a very simple thing. I say, 'Look, if you're enthusiastic enough to give, do you have friends and neighbors and other people who might share that point of view?' " Malek says.

Malek says the new bundlers have been enthusiastic and eager.

But the reliance on those maxed-out big donors is an issue, says Michael Malbin, director of the Campaign Finance Institute. The group found that Romney gets 66 percent of his contributions from maxed-out donors. That's more than anyone else who has run for president since 2003.

At the other end of the spectrum, Romney lags behind all of the other candidates currently in the race in the share of cash raised from small donors, an NPR analysis finds. Just 10 percent of his money comes from people giving $200 or less.

And yet, it's also true that Romney's fundraising base is more stable than anyone else's.

So, while Romney's rivals are on a roller coaster, he stopped in Washington earlier this month for a $10,000-a-person event with lobbyists. And last week, he spent a morning at a New York City law firm, overseeing a campaign telethon with such rainmakers as developer Donald Trump and New York Jets owner Woody Johnson.

"While he's certainly fortunate to have such an amazing base of major donors, he does need to focus on more traditional fundraising," she says.

And that focus will come, Bocskor says, if former Pennsylvania Sen. Rick Santorum keeps gaining momentum. She says Santorum's hard conservative line on women's health issues will likely mobilize moderate Republican women, who have been sitting out the campaign.

"And women tend to be more small and medium donors," she adds.

And Romney does have a financial firewall that's already in place — what one consultant calls "supplemental income." It's the superPAC Restore Our Future, which operates alongside the campaign.

In fact, a new analysis by the Center for Responsive Politics shows that last year, many Romney donors maxed out to the campaign and gave even more — much more — to the superPAC.

"It's almost a kind of pit stop on the way to give huge sums to the superPAC," says Sheila Krumholz, the center's director.

"Even though the superPAC may be technically unaffiliated with the candidate's campaign," Krumholz says, "the donors certainly are tying the two together."

And so are the politicians. For Romney, the success of the superPAC so far seems to be making up for any slowdowns in his campaign fundraising.

When the CIA Bankrolled Italian Intellectuals