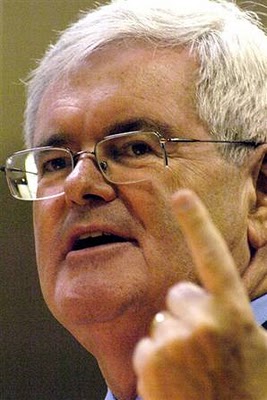 Bad, bad NBC doesn’t support Bush’s orchestrated world war?: “Freedom Watch’s … CEO tells FOX this isn’t the first time NBC has turned down its ads saying NBC specifically objects to its support for the war on terror. … ” How seditious. Here’s Newt to cry over it and lie through his teeth, thereby putting bad NBC in its place, but more importantly – by pulling a fog bank of disingenuous jingoism from his obese, right-wing ass – drumming up public support for the prolongation of genocidal war profits. – AC

This is a rush transcript from “The Big Story With John Gibson and Heather Nauert,” December 7, 2007. This copy may not be in its final form and may be updated.

HEATHER NAUERT, CO-HOST: It’s the big outrage tonight. Who wouldn’t want to thank our troops for serving in a country?

The non-profit group Freedom’s Watch has just launched two new ads that are running on both FOX News and CNN. They wanted them also to run on NBC, but the peacock network said no way. Let’s take a look at one of these ads and see if you can figure out what is just so troubling.

Thank you very much.

People are gathering across the country to support our troops who are away from their families this holiday season.

We’re proud of you.

These young men and women are heroes. They deserve our undying gratitude.

JOHN GIBSON, CO-HOST: So what is NBC’s beef with the spot? It says it won’t air the ad because Freedom Watch’s website address appears at the end. The network says the site is too political and airing the spot would cross the line in their advertising policy. The non-profit group’s CEO tells FOX this isn’t the first time NBC has turned down its ads saying NBC specifically objects to its support for the war on terror.

With us now, former house speaker and FOX News contributor, Newt Gingrich, author of “Pearl Harbor, A Novel of December 8.” And of course today is the day. So Speaker Gingrich, NBC nixes salute to troops. Are they showing their true colors?

NEWT GINGRICH, FORMER HOUSE SPEAKER: Well, of course they are. I have to say as an army brat whose dad served in the army for 27 years, I think this is such an outrage that I hope people will boycott NBC as long as they are so actively anti-our troops, and candidly actively against defending America.

NAUERT: This is just an unbelievable PR thing on their part. I mean, they had to have realized that they would get a ton of criticism. We watched the ad right there. It’s also up on Freedom Watch’s website for people who at home want to watch it themselves. There is nothing offensive about it.

GINGRICH: I think the elite liberal executives at NBC, and I’m very surprised the general electorate allows this to happen, since they own the company. I think the elite liberals who patted themselves on the back about giving away 35 hours to Al Gore are patting themselves on the back tonight for standing up against any kind of right wing pressure, because in their mind, anybody who is in favor of our troops is right wing. Anybody who is in favor of defending America is right wing. And so I have a hunch that this weekend at their various and sundry left wing cocktail parties, they’re all going to congratulate each other on how courageous they are for not showing this ad. But I think for any American who realizes at Christmastime what our families go through who have their mothers and fathers serving America, I think NBC’s refusal to run these ads is just a stunningly dishonorable thing, and I would hope virtually everybody who is watching will decide to boycott NBC as long as NBC is boycotting American troops.

GIBSON: Mr. Gingrich, we just put a picture up a minute ago and I think most Americans don’t know who it is. His name is Jeffrey Immelt, he is the chairman and CEO of General Electric. Now, you know, he doesn’t wear his politics on his sleeve, near as I can tell. Can you possibly explain why General Electric isn’t putting a stop to this sort of thing?

GINGRICH: I can, and I frankly raised it directly, because I think there should be some sense of accountability. I don’t care how left wing, how anti-American defense, how committed to undermining the president the NBC executives are, there is no excuse for a public corporation being so totally one-sided. Again, notice the record, 35 hours for free to Al Gore for propaganda, but not even a paid ad on behalf of the troops who are defending America. That is such a one-sided, I think utterly dishonest policy that its in defense, what I hope that Jeffrey Immelt’s going to look into it, and I hope they’re going to take seriously judging exactly what NBC is doing.

NAUERT: Speaker Gingrich, let me just ask you — excuse me I’m sorry, we’re going to have to leave it there.

GIBSON: Speaker Gingrich, thanks very much.

NAUERT: Thank you for joining us tonight.