"... According to Allied records, close to 100 tons of Nazi gold ended up in Portugal after first passing through Swiss banks that were apparently helping to disguise its origins. Almost half of this gold is believed to have been stolen from the treasuries of European countries that fell to the Nazis. ..." 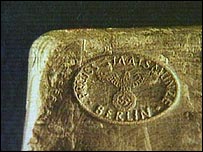 As World War II raged across Europe, Portugal sold tungsten and other goods to Nazi Germany, profiting handsomely from its neutral status in the conflict. The Nazis paid with gold bullion looted from countries they conquered and, it is suspected, from victims of the Holocaust.

After the Nazis lost the war, Portugal secretly sold off some of this gold to Indonesia, the Philippines and above all China, working through Macao, its colonial enclave near Hong Kong.

Those sales, disclosed for the first time by a former senior minister who insisted on anonymity, were the final chapter in a story that has now come back to haunt Portugal's central bank and some of the country's more prominent business families.

Fifty years after the defeat of Germany, Europe has been stunned by a stream of revelations about Nazi gold: who handled it, where it came from and who reaped financial rewards from genocide.

The issue initially arose in Switzerland, where investigators are now examining the Swiss financial transactions with the Nazis and the fate of lost Jewish wealth in World War II.

In recent months, the focus has broadened to include Sweden, Spain and Portugal, where newspapers and historians are raising a separate set of questions about the role of local banks in financing trade and collaborating with the Nazi regime.

At the same time, the Poles have ordered an investigation into the missing wealth of Poland's victims. The Netherlands, too, plans an inquiry to find out what happened to 75 tons of public and private gold, half of the total plundered, which is still missing.

The story of the Nazis' gold has struck a particular nerve in Lisbon because, after Switzerland, Portugal was the largest importer of the gold. The country was officially neutral during the war but its regime had strong Nazi sympathies.

Like a dark, forgotten ghost, Lisbon's past has revived with tales of the city as a pivotal center for spies and a place of unscrupulous deals, where weapons and goods were transshipped to support the German war machine.

Older people here say they knew that the country's neutrality was a useful cover for doing business with all sides. But few had heard of the enormous gold trade with Germany.

According to Allied records, close to 100 tons of Nazi gold ended up in Portugal after first passing through Swiss banks that were apparently helping to disguise its origins. Almost half of this gold is believed to have been stolen from the treasuries of European countries that fell to the Nazis.

Records of Portugal's wartime dealings have recently been revealed in the news media here, astonishing today's generation of Portuguese. They also appear to have embarrassed the establishment deeply. President Jorge Sampaio and Prime Minister Antonio Guterres have discussed the issue in meetings of the Cabinet, but have so far declined to comment publicly.

Until 1968, when the dictator Antonio Salazar retired, censorship was used to keep secrets. When Portugal became a democracy in 1974, there were more pressing matters like the leftist revolution and the independence of the colonies.

Now, politicians, historians, students and news organizations are demanding that the Government open its archives and give a full accounting of collaboration with Hitler.

''It's a political and a moral issue,'' said Fernando Rosas, a professor of contemporary history at New University in Lisbon. ''This Government should speak out. It's not their doing.''

The Bank of Portugal, which occupies a somber building on the downtown Rua do Comercio, has long had a venerable image, but recent celebrations of its 150th anniversary were clouded by the public debate about its Nazi collaboration. It declined to send representatives to recent round-table discussions on the gold issue organized by the city of Lisbon, television stations and universities.

Because the bank had a monopoly over the gold trade until after the war, its archives are considered vital. But it has spurned requests from historians and journalists for access to wartime documents, saying it is bound by strict secrecy laws. The bank has promised to study the matter.

Down in its vaults, the bank still has ''two or three'' gold bars stamped with swastikas, according to Nuno Jonet, a bank official.

''We kept them as curiosities, Mr. Jonet said. ''We do not admit any wrongdoing. The gold acquisition was the result of perfectly legal trade operations. I'm sure people at the time did not know the gold coming here was stolen.''

Portugal used the same arguments before the Allied Tripartite Commission, which was in charge of recovering stolen gold after the war. American officials tried to pressure Portugal to surrender 44 tons of gold by freezing its assets in the United States and cutting back on wheat exports.

But the Salazar regime did not budge. In 1953 the Allies finally gave up, accepting the four tons Lisbon offered to return and letting it keep the rest.

''By then the cold war was under way and the Americans wanted to keep the Azores as a strategic base,'' said Jose Freire Antunes, who has written a history of the Azores.

Both Portugal and Switzerland insist that they were not aware that the Nazi gold they used for trade had been looted.

Antonio Louca, a historian at New University who is writing a doctoral thesis on Portugal's dealings in Nazi gold, dismisses these claims.

He said that as early as 1942 the Allies officially notified Western countries that Nazis were disposing of stolen gold through Swiss banks. Mr. Louca said he has recently obtained documents from Portugal's Foreign Ministry archives that cite the warning.

Old trade records tell part of the story: in 1940, less than 2 percent of Portugal's exports went to Germany; by 1942, that figure had reached 24.4 percent. Portugal sent Germany textiles, boots and food, but it earned most from tungsten, an alloy used in steel, which was indispensable to the Nazi war machine.

''At the height of the tungsten fever, prices in Lisbon increased by up to 1,700 percent,'' one history book reports.

Lisbon was also a crucial intermediary for Berlin, bringing insulin and industrial diamonds from Latin America and food from its African colonies and selling Nazi gold in South America. A businessman whose foreign company had a long presence here said: ''Salazar, the President, was the master of wartime neutrality. He charged extortionary prices.''

The full story of Portugal's Nazi gold may not be hidden in bank ledgers. There were other, secret channels.

Mr. Louca, the historian, said he has obtained German documents, recently declassified, that show that in 1944 couriers were secretly running large gold shipments from Germany to its embassy in Lisbon. The couriers bypassed the Portuguese central bank and sold the gold locally.

The documents raise several disturbing questions and touch briefly on the fate of one large and wealthy Jewish family.

By the summer of 1944, Europe was in chaos. German forces had occupied Hungary, an ally, when it took steps to withdraw from the war, and the Nazis had captured several members of the Weiss-Chorin family, owners of the country's largest industrial empire.

Under duress, the family made a deal with the SS, according to postwar American intelligence reports: the Nazis would get a large part of the Weiss empire and the family could leave Hungary. At least 44 family members left, of whom 32 arrived in Portugal in June 1944.

In July, the German Embassy in Lisbon began complaining in telegrams to Berlin that the gold price in Lisbon was dropping. Berlin responded by asking if this was a result of the sales by the couriers or sales by the Weiss family, which it suspected of bringing valuables from Hungary. Members of the Weiss family have said they brought no gold to Lisbon.

''Why was this gold coming here and why did the couriers not sell the German gold to the central bank?'' Mr. Louca said. ''The chances are that the gold included coins and jewelry, which had been stolen from individuals.''

Buyers reportedly included Portuguese businessmen and bankers, some of whom still own large establishments today.

After the war, the Allies demanded that Portugal give back at least 44 tons of looted Nazi gold. But Lisbon instead began to sell off its Nazi bullion secretly through Macao, with much of it going to China in the 1950's and 60's.

According to a government official who was himself involved in supervising numerous shipments, the China-bound gold was flown from Portugal to Macao, and from there moved across the Chinese border. The former official said some ingots sent to Macao were still embossed with the sealof the Dutch Treasury, which had been plundered by the Nazis; others were marked with swastikas. A number of bars were carried from Macao to the Philippines and Indonesia, strapped on people's bodies, the official said.

Historians, politicians and journalists are demanding that the Lisbon Government tell all. Fernando Rosas, the professor who is also editor of the prestigious magazine Historia, said the Government must allow free research and clarify the whole issue. ''The country needs to know the truth,'' he said.

Mr. Louca wonders if the gold story will ever be fully unraveled.

''Looting monetary gold was one thing -- stealing it from individuals, from victims, is another,'' he said. ''There is evidence that both types of gold came to Portugal.'' But, he added, even if new details spill out of official archives, it may be too difficult to separate the different sources of gold.