Ralph Nader and many others who have finally reached the conclusion that Obama is a military-corporate Janus, an ambitious lackey with no regard for human rights, are a bit late. Realizing that there was no time to waste, that he'd given a pass to the torture of innocent detainees by a criminalized CIA, and was generally acting as if his name was Bush, I called for his impeachment in June 2009. See "Impeach Obama." (My reasoning bore no resemblance to the lies of Tea Party Birchers, who assembled a platform of false dialectics to clear the road for even more politico-corporate corruption. BTW, I'm not tooting my own horn here, but pointing out that anti-fascists are always ahead of the game because we aren't programmed by fascist-bluster-and-fart-movie media.) How many have been destroyed since then? How many Blakwater killers and Wall Street swindlers have been permitted to thrive? At last, others have come to the realization that Obama is a grotesque parody of the candidate who conned his way into office and openly panders to "conservatives" who despise him. Is there a campaign promise that he hasn't violated, from tax cuts for the rich on down? CIA gun-slinging "diplomat" (another executive fraud) Raymond Davis is his true soul brother. The two should "sit down for beers" soon ... to discuss how many innocents they've murdered in the name of a dead democray. Viva Ralph Nader for facing reality and "doing the right thing." - AC 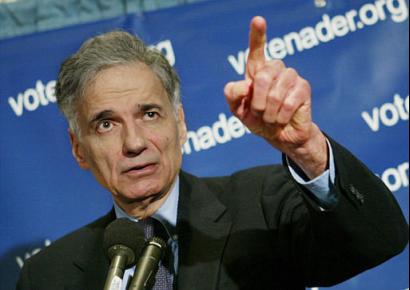 "Why don't we say what's on the minds of many legal experts; that the Obama administration is committing war crimes and if Bush should have been impeached, Obama should be impeached," Nader said in an interview with the anti-war Democracy Now! organization.

Nader's comments came before the U.S. on Saturday launched military strikes into Libya, but they are among the toughest criticisms Obama has endured from the left.

The consumer advocate participated in an anti-war demonstration outside the White House this weekend, during which more than 100 protesters were arrested.

The U.S. sought the passage of a U.N. Security Council resolution and commitments from European and Arab nations before taking action in Libya to thwart the country's leader, Col. Moammar Gadhafi, from killing civilians amidst a rebellion against his regime.

Nader's comments, however, were mainly directed at Obama's prosecution of the Afghanistan war. Some liberal activists have objected to Obama's decision to escalate the war and are unhappy with government's treatment of Bradley Manning, the Army private accused of leaking classified documents to the organization WikiLeaks.

"[Bush officials] were considered war criminals by many people. Now, Barack Obama is committing the same crimes," Nader said. "In fact, worse ones in Afghanistan. Innocents are being slaughtered, we are creating more enemies, he is violating international law."

Obama appears to be facing growing resistance from the left over his administration's foreign policy.

Anti-war filmmaker Michael Moore sharply criticized the president's authorization of military strikes in Libya and a cadre of liberal House Democrats are questioning the constitutionality of the Libya operation.