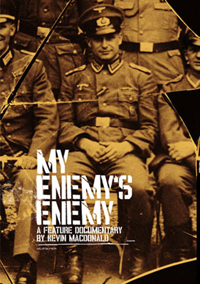 An interviewer leans in to ask his question: “Do you regret anything you have done in your life?” Klaus Barbie doesn’t hesitate. “Deep down, there have been errors,” says, “But we all follow a line.” Asked to explain, he adds, “I’m talking about a line of character.”

This scene, grainy and brief, opens My Enemy’s Enemy (Mon meilleur ennemi). His shoulders hunched and his hands cuffed, Barbie looks away from his questioner and into the camera, the image of Barbie’s aged face fades to black and white and then freezes, still elusive. Kevin Macdonald’s film goes on to trace how that specter came to be, how a Nazi war criminal—an infamous one, at that—came to spend 30 years in a Bolivian villa, surrounded by his family and working for the U.S. government.

Indeed, the “line of character” considered by the film is less Barbie’s, per se, than the ideology and politics that shape Western activities, both official and covert, postwar and after. Barbie’s own story, at once outrageous and banal, occasions a broader investigation of international hypocrisies, the sort that produce the adage “My enemy’s enemy is my friend.” At the end of WWII, the film remembers, “Our governments old us that fascism had been defeated and all the war criminals would be punished for their crimes.” The narrator goes on to say, under archival shots of concentration camp prisoners, exuberant Allied troops, and battered bodies, a smiling Ike and Richard Nixon, Kim Phúc, a space-race lift-off and atomic bomb tests, that “Neither of these assertions turned out to be true.” Punctuated by a recurring vintage shot of strawberries and cake (as in, the idea is to have it and eat it too), the montage illustrates that U.S. and other world leaders used fascists and war criminals “to fight against the threat of Communism and ultimately to shape the world we live in today.”

My Enemy’s Enemy, available on demand as of 10 March, on Sundance Selects, doesn’t come up with new information so much as it makes a compelling case against the usual hypocrisies and perversities that inform international politics. It’s a system that is by definition erratic and exploitative. In fact, as the film shows, this is the argument made at Barbie’s eventual trial by his lawyer, Jacques Vergès (the focus of Barbet Schroeder’s film, Terror’s Advocate): after three decades of employment by the U.S. Army Counter Intelligence Corps (CIC), the defendant was arrested and charged with war crimes—when he was no longer “useful.”

This question of usefulness is at the heart of Barbie’s wartime and postwar experiences. The documentary doesn’t dig too deeply into the psychological details of what made Barbie Barbie, what might have driven his savagery while installed at the Hôtel Terminus. It does allow that, according to biographer Neil Ascherson, he was an unremarkable son of a village schoolmaster who may have “just wanted to matter.” Like many other Germans, Ascherson suggests, young Barbie was “ready to be just overthrown by the Nazi movement,” an inclination he pursued by joining the Sicherheitsdienst (SD). The film is structured as a series of interviews, including several tearful recollections testimonies by Barbie’s victims and a plainly defensive (archival) interview with his daughter, Ute Messner, who maintains that his reputation as a “butcher” was “invented” by his enemies (and besides, she goes on, butchering is a noble profession).

At the same time, the movie never lets you forget that this reputation was also set aside by Barbie’s U.S. employers as long as such forgetting was convenient. He was set up in La Paz, Bolivia as a “businessman” named Klaus Altmann, initially gathering information on the French Communist Party and later helping the CIA to set in motion a military coup in Bolivia (1964) and pursue Che Guevara. A fellow CIC agent rationalizes, “I don’t think he really was a sadist,” but instead, “did what he had to do, and he was proud of his ability to interrogate people.”

The film lays out this history as a network of contradictions and deceits, of selves and others. When a U.S. Justice department representative submits that the CIC didn’t know Barbie was wanted for war crimes in France, the scene cuts directly to journalist Christopher Simpson, who says straight up, “Bullshit.” The CIC, he says, certainly read French newspapers throughout and after the war, where the story was regularly reported.

“There was this idea that the ends justified the means,” says Elizabeth Holtzman, the former U.S. Representative from New York and member of the Nazi War Crimes and Japanese Imperial Government Records Interagency Working Group (IWG). “That is, of course, a Nazi idea and a totalitarian idea.” And that is, of course, an idea that grounds most wars, cold and hot. Holtzman points as well to Iraq and Afghanistan, where the U.S. has made use of “the most extreme fundamentalist Islamic groups.” If, she concludes, “The ends justify the means and you choose to use Nazi war criminals, them where do you draw the line, ever?” As long as this line remains un-drawn, Macdonald’s documentary shows, there can be no accountable “line of character” either.