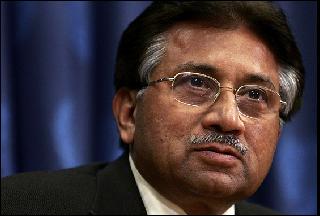 According to the FIA Tuesday report, Musharraf had appointed two senior policemen, who were suspected of not giving adequate protection to opposition leader Bhutto at the time of her murder.

Musharraf is accused of giving the pair their orders.

In December 2010, a Pakistani anti-terrorism court issued warrants for the arrest of the two officers for their failure to protect Bhutto, as they also, later, refused to conduct a post-mortem on her body.

The two were Rawalpindi's police chief at the time, Saud Aziz, and another senior police officer, Khurram Shahzad.

Arrest warrants were issued and the two policemen were detained.

According to FIA, the officers had failed to provide adequate security to Bhutto, denied her a post-mortem and were also responsible for hosing down the scene of the killing immediately after the crime.

Bhutto was assassinated on December 27, 2007 in a suicide attack as she was leaving an election rally in Rawalpindi. A gunman had reportedly shot her in the neck and set off a bomb. At least 20 other people died in the attack and several more were injured.

Bhutto's widower, President Asif Ali Zardari, who won the presidency after Bhutto's death, has pointed the finger of blame at the then government of Musharraf and threatened to take action against the former military ruler.

NUKEGATE: THE PERILS OF WHISTLEBLOWING