Monsanto Should be Tried for ‘Ecocide, Genocide’, says NGO 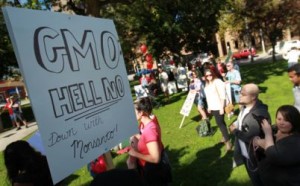 “ … Contrary to what Monsanto proclaims, GMOs have led to a decline in yields and an increase in pesticide use, soil deterioration and farmer indebtedness and suicides. In India, most of the 284,000 farmers’ suicides are in the cotton belt. … “

New Delhi – Monsanto should be tried for “ecocide and genocide” as its genetically modified cotton seeds are responsible for the poor cotton crop yields, deterioration in soil quality and suicides by farmers in India, said NGO Navdanya slamming the World Food Prize conferred on the US multinational Wednesday.

Monsanto has attracted criticism from activists worldwide for being conferred the top food award.

Navdanya, an Indian-based non-governmental organization which promotes biodiversity conservation, biodiversity, organic farming and the rights of farmers, said: “Contrary to what Monsanto proclaims, GMOs (genetically modified organisms) have led to a decline in yields and an increase in pesticide use, soil deterioration and farmer indebtedness and suicides. In India, most of the 284,000 farmers’ suicides are in the cotton belt – Monsanto controls 95 percent of the cotton seeds.”

“In a just world, Monsanto should be tried for ecocide and genocide,” it said in a statement.

“Yet on Oct 16, with the full support of powers most responsible for the state of hunger in the world, Monsanto is giving itself the World Food Prize!

“We condemn this self congratulatory accolade – the GMO emperor has no clothes… We will not allow our Seed and Food Democracies to be hijacked by the current outmoded, reductionistic mechanistic paradigm,” it said.

It said the award comes on Oct 16, World Food Day, “a day when people all over the world are reminded of the shameful fact that over one billion people in the world are hungry and another billion are malnourished – this despite the fact that government institutions and multinational seed and food conglomerates have repeatedly over the decades declared to have the solution – one based on industrial agriculture, chemicals, GMOs and monocultures”.

“FAO tells us that more than 70 percent of food comes from small farms and small farmers. Only 10 percent of the GMO corn and soya grown by Monsanto is eaten directly. (And this is because that 10 percent is not labelled and would be 0 percent if people had labelling and food freedom). The other 90 percent goes to feed cars and animals,” it said.

“Let us honour all the Real Food Heroes who bring us real food by defending our food freedom- small farmers and gardeners, mothers and chefs, honest and real scientists. Let us celebrate those who save and exchange seed, preserve biodiversity and enrich our soils, and who through their actions are building food security all over the world and in communities everywhere with vibrant alternatives based on seed reform and food freedom.