Study to test human ability to control robotics with the mind 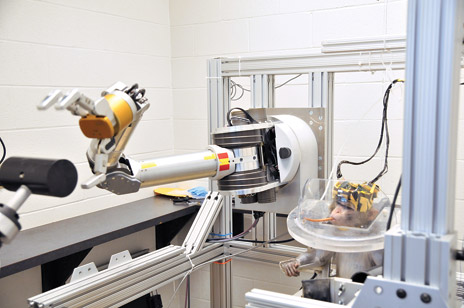 Using its mind alone, this monkey controls a seven-degrees-of-freedom robotic arm and is rewarded with a drink (hence the straw). (Credit: University of Pittsburgh)

Researchers are ready to advance their tests of a novel brain-computer interface (BCI) from animals to human subjects, and the Defense Advanced Research Projects Agency just granted them more than $6 million over the next three years to get those human clinical trials under way.

Ongoing research out of the Johns Hopkins Applied Physics Laboratory and the University of Pittsburgh has already demonstrated that the team’s tiny 10×10 array of electrodes implanted on the surface of a monkey’s brain can process activity from individual neurons to guide a robotic arm through such simple tasks as turning doorknobs and eating marshmallows.

“Our animal studies have shown that we can interpret the messages the brain sends to make a simple robotic arm reach for an object and turn a mechanical wrist,” says Andrew Schwartz, a professor of neurobiology at the Pitt School of Medicine and a senior investigator on the project. “The next step is to see not only if we can make these techniques work for people, but also if we can make the movements more complex.”

Expected to launch later this year, the study will test two separate electrodes on human participants, and the team is already brainstorming more sophisticated approaches to the technology, including a telemetry system that would enable wireless control of prosthetic arms with sensory components.

Schwartz has worked on algorithms to translate the brain’s electrical activity into physical movements for several years; initially he showed that monkeys can use thought alone to move cursors on computer screens, and in 2008 demonstrated that they could also control a simple robotic arm.

“We are now ready to begin testing BCI technology in the patients who might benefit from it the most, namely those who have lost the ability to move their upper limbs due to a spinal cord injury,” says Michael Boninger, director of the UPMC Rehabilitation Institute and a senior scientist on the project. “Our ultimate aim is to develop technologies that can give patients with physical disabilities control of assistive devices that will help restore their independence.”

This will not be the first human clinical trial of a BCI. In 2004, quadriplegic Matthew Nagle (who was paralyzed from the neck down after being stabbed) became the first person to use BCI to control a computer mouse cursor. His BrainGate Neural Interface System was eventually removed, and in 2008 Nagle died, but before his death he told PBS: “I can’t put it into words. It’s just–I use my brain. I just thought it. I said, “Cursor go up to the top right.” And it did, and now I can control it all over the screen.