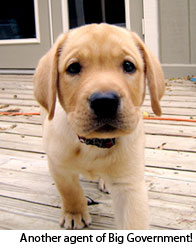 The main philosophical principle of the conservative-led tea party movement is an “aversion to big government,” with tea party organizers turning their ire on comprehensive health reform, clean energy legislation, and even mandatory trash collection.

Now, a group of Missouri tea partiers have found a new target: regulations that would mandate more humane conditions in the state’s puppy mills. This November, Missouri voters will go to the polls and decide the fate of Missouri’s Proposition B, which would place new regulations on puppy mills, including mandating that they provide “sufficient food and clean water, necessary veterinary care, sufficient housing, including protection from the elements, sufficient space to turn and stretch freely, lie down, and fully extend his or her limbs, regular exercise, and adequate rest between breeding cycles.”

As TPM Muckraker’s Jillian Rayfield reports, the Missouri Tea Party and the Tea Party Patriots have begun organizing meetings against the proposition. One tea party activist described the measure as being about the “government or the big company trying to tell people what to do“:

The Tea Party has also gotten on board the anti-Prop B bandwagon. A meeting called “Vote NO on Proposition B” on October 12 is advertised on websites for the Missouri Tea Party and the Tea Party Patriots. The event, held at Coach’s Pizza World, is being organized by the Mexico Tea Party, which activist Ron Beedle told TPM is a relatively new chapter of the Tea Party. This is their first meeting, he said, and Prop B is about the “government or the big company trying to tell people what to do.”

Also campaigning against the proposition is the local chapter of conservative Phyllis Schlafly’s Eagle Forum and Samuel Wurzelbacher (”Joe The Plumber“). Wurzelbacher has teamed up with the Alliance For Truth, an anti-Prop B organization strongly backed by the kennels and mills across the state, to blog against the measure. One blog post by him features an animal rescue officer kicking down the door of a home.

Meanwhile, the Missouri Cattleman’s Association is warning that if the Humane Society — which is a big booster of the proposition — manages to pass the measure, they may be able to succeed in bettering conditions for farm animals as well.

Eagle Forum’s Andy Schlafly: E=mc2 is a Liberal Conspiracy that Condradicts the Bible