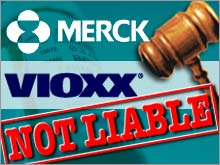 Back in 2004, when Merck took Vioxx off the market, I remember reading that investigators believed the drug may have been responsible for as many as 50,000 deaths from heart attacks and strokes. 50,000! That must be a typo, I remember thinking, because, while the number appeared in various accounts, nobody seemed too upset about it. The story was played on the business pages, with more concern voiced about the hit on Merck’s stock price than on the victims. ...

This is the right website for anybody who really wants to understand
this topic. You realize so much its almost hard to
argue with you (not that I really would want toHaHa).
You definitely put a brand new spin on a topic which has been written about for ages.
Great stuff, just excellent!