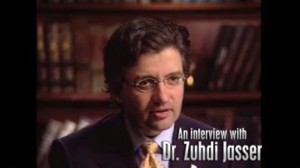 Although Representative Peter King (R-NY) hasn’t officially announced the witness list for Thursday’s hearing on “The Extent of Radicalization in the American Muslim Community and that Community’s Response,” a leaked list [1] confirms that his star witness will be Dr. Zuhdi Jasser. An Arizona physician and founder of the nonprofit American Islamic Forum for Democracy, Jasser is a favorite in the cottage industry created to hype the threat of “creeping Sharia law.” He’s frequently presented as a representative of—and advocate for—“true” moderate Islam.

Unlike more wild-eyed anti-Muslim agitators like Frank Gaffney (with whom Jasser has collaborated) and Pamela Geller, Jasser comes across as calm, sober and professional. He gained notoriety in 2008, with the release of the Clarion Fund [2] film The Third Jihad, which claimed that a fifth column of Muslim extremists have infiltrated America with the intent of establishing a theocratic state. The star of the film, Jasser helped promote the claim [3] that has ricocheted all over the right—that a single document written by a lone Muslim Brotherhood member in the early 1990s proves that American Muslim charities and advocacy groups are part of a plot to subvert the Constitution and America and install an Islamic theocracy.

More recently, Jasser made an appearance in Newt Gingrich’s 2010 documentary, America At Risk: The War With No Name, produced by Citizens United, the conservative group whose efforts to air its anti–Hillary Clinton documentary led to the Supreme Court decision allowing unlimited corporate money in campaigns. The release of the film roughly coincided with the Geller-created hysteria over Park51, as well as with Gingrich’s own calls to ban Sharia, warning of “a comprehensive political, economic and religious movement that seeks to impose sharia—Islamic law—upon all aspects of global society.” The film is notably anti-Obama. (Just last week, Gingrich launched a presidential campaign exploratory committee.)

Jasser is undoubtedly part of a strategy to deflect widespread criticism that King’s hearings are an attempt smear all Muslims with a broad brush. That’s an accusation that Jasser and others in the anti-Muslim agitprop stable are accustomed to averting. And they do so with a sleight of hand: that it’s not individual American Muslims who are radical, it’s their leaders—Muslim charities and civil rights groups, imams and a religious leadership that is dominated by radicals, who in turn dupe the gullible masses.

In Gingrich’s film, Jasser maintains that he’s attempting to awaken his fellow Muslims who have nothing to read about their religion but Islamist propaganda. “The vast majority of Islamic literature that they can pick up and read teaches about the pre-eminence and supremacy of the Islamic state over every other society,” he asserts. The narrator then ominously warns that Jasser’s push for the “separation of mosque and state” has been “attacked in the American Muslim community.” So while speakers in the film (including Gaffney, who has been shunned by some prominent conservatives because he is a “crazy bigot [4]”) issue the disclaimer that they’re not talking about American Muslims writ large, the vaguely defined “American Muslim community” is accused of “attacking” the rare good Muslim.

Jasser is not only presented as the good Muslim, but the good American and, critically, the good conservative. Jasser—who has contributed to the campaigns of Arizona Republicans—reveals his true objection: “I raise my kids to be conservative, family-value Muslims,” he says in a film produced by the twice-divorced Gingrich and his third wife, Callista. “These ideas don’t matter to them [the Islamists].... [for them], its about a political collectivism.” In his loaded use of the term “political collectivism,” Jasser is not alone: other anti-Islam conservatives maintain that the Muslim Brotherhood’s aim is not just a caliphate but a socialist caliphate. The Brotherhood’s “common mission,” says Jasser, is to “advance Sharia, to advance political Islam and the collectivism of a Muslim political movement in America that’s different from our Constitution and our Bill of Rights.”

Just last weekend, President Obama’s Deputy National Security Advisor Denis McDonough spoke at an event hosted by the All Dulles Area Muslim Society, a Washington, DC–area mosque whose executive director, Iman Mohamed Magid, is also president of the Islamic Society of North America (ISNA). ISNA is a mainstream Muslim group that has worked with and been praised by the Union for Reform Judaism, the Interfaith Alliance and others. During the anti-Park51 hysteria, ISNA convened [5] an interfaith summit to combat Islamophobia and was joined in its efforts by numerous Christian and Jewish denominational leaders.

But Jasser refuses to believe that ISNA is anything but part of an insidious Muslim Brotherhood plot. In Gingrich’s film, he targets the Obama administration because White House adviser Valerie Jarrett was the keynote speaker at ISNA’s 2009 annual conference, but conveniently omits that megachurch superstar Rick Warren also spoke there [6] (on the Fourth of July, no less). Jasser complains that Obama administration officials “pander to groups that are clearly Islamist.”

This attack on the Obama administration may well point not only to the possible testimony at King’s hearings but to the right’s political rhetoric heading into the 2012 presidential campaign: vague, unsupported insinuation about the connectedness of Obama, radical Islam and “collectivism.” By speaking to “these groups,” Jasser charged, administration officials “put our country in peril, because they are advocating and promoting and basically apologizing for groups that have ideas that are a slippery slope toward that jihadism.”