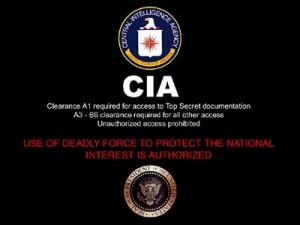 First, the uninitiated parapolitical virgin can bone up on Operation Mockingbird here.  It's not lizard ETs ...

AND it's not as though a state propaganda system is unique in military-industrial history.

But MediaBistro's Alex Alvarez isn't buying it. Not for a minute.

State propaganda has been the rule in all nations that have made the mistake of wandering into militay-corporate rule. To deny that the CIA has had some involvement in programming public opinion is beyond naive, it seems to me.

But Alvarez is no bimbo, no ball of fluff ... despite her past at Playgirl and Soap Opera Weekly, where she cut her teeth as a hard-bitten journalist who knows the score.

Alex Alvarez has been around the block - she lets the conspiracy theorists have it in her introductory remarks to Mark Lane's recent whistle blast at the CIA-controlled media:

"  ... [Lane] also offers the paper a bit of unsolicited advice: They should leave him alone and focus instead on how the CIA is, like, makin' shit tough for journalists, maaaan. Here, let me adjust your tinfoil hat as you read this excerpt from the letter Lane sent editor Chuck Strouse on Posner's behalf: 'I do have one further suggestion. Since the issue of the search for the truth may be of interest to you and since, as you must know, a committee of the United States Senate years ago and then again more recently, concluded that the CIA, the FBI and other intelligence agencies have assets pretending to be journalists embedded in the major news media, that might be a subject that could attract your attention. ... It is that use of the media and the publishing houses that is a threat to our democracy and impedes our right to a free press pursuant to the unambiguous mandate of the First Amendment. That is a campaign that many of us could support, endorse and relish. Our country needs muckraking journalists who can recognize muck worth raking when they see it.' ... "

Every word of Lane's statement was true enough -  but Alex Alvarez - mentally sharpened by challenging soap opera research  - insists on living in an alternative universe where intelligence agencies do not co-opt free media. Tin-foil ...

MediaBistro, it's worth mentioning, perhaps, is a CIA DATA MINING FRONT that spies on computers in Hollywood, CA. This is discussed at length in PARTS ONE AND TWO OF THIS STORY ON THE DEATHS OF DUNCAN & BLAKE. Be sure to scroll down to the 'data mining' sections.

Could this have anything to do with her ridicule of Lane's observations on the CIA and the media? Only she can know for sure. I'm not a mind reader, but it appears to me that she's blowing smoke at Operation Mockingird to divert attention from MediaBistro's own extensive CIA ties.

Alex Constantine – Who are Anonymous?

What do they have in common with Merck?

How can they start a hedge fund? (if they are anonymous)

I could go on… but she looks a lot better than I do.