"Syria is one of the biggest propaganda schemes of our time. When the dust settles, if it does, it will be revealed”

“Journalists are never real journalists if they are agents of power no matter how they disguise that role.”

As bad as those ‘war theater’ lies by Brian Williams and Bill O’Reilly are, this howler by NBC and their ‘trusted’ reporter Richard Engel – is much worse by far. Keen to help Washington in its all-out campaign for regime change in Syria, we can now see very clearly – to what lengths major US media outlets are were willing to go, by using a completely contrived situation to publicly demonize the government of Bashar al-Assad in Syria.

Let’s be clear. We’re not just talking about mere spin here. Broadcast executives knowingly facilitated the concocting of a false narrative which just happened to fit perfectly into Washington’s own neatly arranged foreign policy objectives at that very moment…

Back in December 2012, Engel claimed he was kidnapped along with four other journalists while traveling inside Syria by “pro-Assad Shi’ite forces”. Engel went on to claim how his “pro-Assad” captors brutally tortured reporters and even killed their ‘Free Syrian Army’ rebel chaperone, before eventually being “rescued” by other rebels. Engel did endless rounds in the US media retelling his sensational tale, skillfully crafting a narrative of suffering at the hands of the evil and merciless “Syrian government”, and “Iranian-aligned Shi’ite forces”.

This week, the story finally collapsed. It turns out that Engel was at the very least an unquestioning (journalist?) dupe or ‘useful idiot’ in this saga. We’re told he is fluent in Arabic and a veteran international correspondent, so it really doesn’t really make sense that he would be so stupid as to fall for such a transparent charade. At worse he could also be a knowing accomplice to it. One cannot say if he was definitely in on the ruse, but it’s more than safe to say that he played a staring role in a giant US media propaganda exercise, himself voluntarily inserting faux ‘Shi’ite’ and ‘pro-Hezbollah’ talking points into his narrative. Not surprisingly, MSNBC’s Rachel Maddow and others happily swallowed this scripted account, over and over. Two and a half years later, the principle players finally admit it was fake. Investigative journalist Glenn Greenwald of The Intercept reports:

“As it turns out, that seems to be exactly what happened. Last night, Engel posted a new statement on the NBC News website stating that, roughly one month ago, he had been contacted by The New York Times, which “uncovered information that suggested the kidnappers were not who they said they were and that the Syrian rebels who rescued us had a relationship with the kidnappers.” That inquiry from The NYT caused him to re-investigate the kidnapping, and he concluded that “the group that kidnapped us was Sunni, not Shia” and that “the group that freed us” — which he had previously depicted as heroic anti-Assad rebels — actually “had ties to the kidnappers.”

“NBC officials knew at the time that there was reason to be highly skeptical of the identity of the captors, but nonetheless allowed Engel and numerous other NBC and MSNBC reporters to tell this story with virtually no questioning.” “The Brian Williams scandal is basically about an insecure, ego-driven TV star who puffed up his own war credentials by fabricating war stories: it’s about personal foibles. But this Engel story is about what appears to be a reckless eagerness, if not deliberate deception, on the part of NBC officials to disseminate a dubious storyline which, at the time, was very much in line with the story that official Washington was selling (by then, Obama was secretly aiding anti-Assad rebels, and had just announced – literally a week before the Engel kidnapping — “that the United States would formally recognize a coalition of Syrian opposition groups as that country’s legitimate representative”). Much worse, the NBC story was quite likely to fuel the simmering war cries in the West to attack (or at least aggressively intervene against) Assad.”

That’s a pretty comprehensive assessment of what went down, and this also hints at coordination – at a very high level – between the mainstream media and the US government.

SPOOKS NOTE: For those versed in the art of grifting and professional con artistry, this type of Kansas City Shuffle scam would require that at least one member of the kidnap victims’ party be in on the con, so as to ensure that the rest of group stayed in line and didn’t do anything stupid during the staged operation.

Without a doubt, this is a prime example of the CIA’s Operation Mockingbird in action – from beginning to end – a purely fake story, created and designed to cajole both public and also mainstream media opinion over towards the US State Department’s stated goal of regime change in Syria.

“At the very least, NBC owes a serious accounting for what happened here, yet thus far refuses to provide one (note how, as usual, the media outlets who love to sanctimoniously demand transparency from others refuse to provide even a minimal amount about themselves). There were — and are — a lot of shadowy interests eager to bring about regime change in Syria and to malign Iran and Hezbollah with false claims. Whether by intent or outcome, that’s what this story did. If it was not only false at the time, NBC executives repeatedly broadcast it, but recklessly disseminated with ample reason to suspect its falsity, that is a huge journalistic scandal.” The rest of the US mainstream media mockingbirds will not touch this story in the same way they did with egomaniacs Brian Williams and Bill O’Reilly. In classic ‘WWF’ fashion, CNN’s ‘hard-hitting ‘senior’ political correspondent and host of “Reliable Sources” (yes, that’s the actual title of the show), Brian Stelter, spent weeks lamenting over NBC’s Williams and chasing FOX’s O’Reilly, which achieved nothing in the end other than making Stetler appear “tough” on FOX. Will the ‘hard-hitting’ Stetler dare touch the Engel story with even a portion of the theatrical zeal he unleashed on O’Reilly?

Probably will not. Firstly, because if he did, it would open up CNN to criticism for doing the exact same scam (perpetrated by the network against its audience) when it proudly paraded its prized ‘Syrian Opposition’ figure, named Danny Dayem, aka ‘Syrian Danny’ (strangely, he speaks with a noticeable London accent), who has since disappeared from public view. Danny was CNN’s go-to guy, a self-described “opposition activist”making regular appearances via satellite and even in-studio, with Anderson Cooper and others – lobbying for the US and NATO to ‘join in’ by arming, or intervening to help him and his merry band of upstart“moderate rebels” aka the ‘Free Syria Army’. It was all going swimmingly well, until video was leaked which showed Danny operating out of make-shift sound studio somewhere in Syria (or Turkey?) complete with fake gun and mortar fire audio sound effects, coordinating with CNN producers on the other line – in essence creating fake ‘on the ground’ news reports from behind the lines. CNN should have lost its broadcast license for this, just as NBC should too, but it pretty evident that regulations do not apply to major media outlets.

Consortium News explains who’s behind the bevy of fake “activists” attached to the ‘Syrian Spring’:

“Syrian dissidents received funding from the Los Angeles-based Democracy Council, which ran a Syria-related program called the “Civil Society Strengthening Initiative” funded with $6.3 million from the State Department. The program is described as “a discrete collaborative effort between the Democracy Council and local partners” to produce, among other things, “various broadcast concepts.” James Prince, the founder and President of the Democracy Council, is also an adviser to CyberDissidents.org, a project created in 2008 by the Jerusalem-based Adelson Institute for Strategic Studies, founded and funded by Sheldon Adelson, a patron and confidant of Benjamin Netanyahu. Other resources include postings on social media and alternative websites with sensational stories such as the anti-Assad activist “Gay Girl in Damascus” who turned out to be a middle-aged American man in Scotland or Syrian Danny Abdul Dayem, who was frequently interviewed using fake gun fire and flames in his interviews.”

CNN would never dare expose its own role in Washington’s ‘regime change’ soap opera in Syria, alongside the entirety of the US mainstream media – all of whom have gladly worked in concert to promote each and every one of the US State Department’s deceptive talking points about ‘moderate rebels’ in Syria, allowing both ISIS, al Nusra, and other known terrorist brigades in Syria, much-needed time to build-up their ranks and gain traction throughout the region. Yes, the US and western media were crucial in making this process happen from 2011 until now.

It’s evident now how “respected” NBC journalist Richard Engel had a bias in favor of the ‘rebels’ (via The Intercept):

NBC’s security advisers were convinced that there was some FSA involvement in this and contacted wealthy Syrian-American donors of the rebel group, pointing out that Richard had been supportive of the uprising against Assad.

Hardly ‘objective’, here we can see how Engel plays the gray role of activist, or ‘change agent’, albeit, embedded inside a major media outlet. But that’s not all. He also appears to have initially lied about witnessing his captors being killed during his heroic rescue (all part of weaving the kidnapping myth). The fact that Engel has changed his story about this very important detail (a crucial detail which effectively ‘glued’ the NBC false narrative together) should indicate that he was aware of the false narrative, if not involved in it. The Intercept’s Glenn Greenwald adds here:

“On a different note: as I noted above, Engel claimed repeatedly that the anti-Assad rebels killed some of his pro-government captors when rescuing him. He stated the same thing in a Vanity Fairarticle he wrote recounting his kidnapping. But as The New York Times notes today, Engel now acknowledges that he never saw a body:

For any readers who may doubt the existence of Operation Mockingbird, or that top US media outlets are working in full coordination with entities like the US State Department and the CIA – this story should put those doubts to rest.

Verdict: NBC, along with the other media majors, have been caught promoting another war overseas. They did it in Iraq, they’ve done it with Syria, and they’re also doing it with the Ukraine. 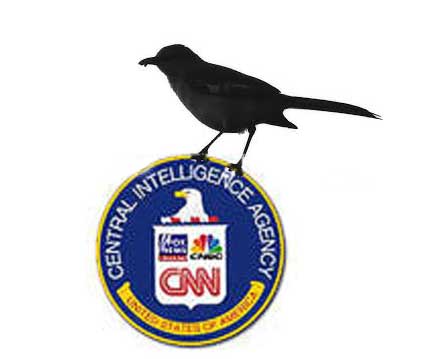