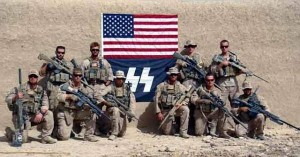 his Sept. 2010 photo posted recently on the Titiusville, Fla.- based arms manufacturer Knight's Armament's Internet blog, shows members of Charlie Company, 1st Reconnaissance Battalion, out of Camp Pendleton, Calif. in Sangin, Helmand province, Afghanistan. The Marine Corps confirmed Thursday Feb. 8, 2012 that one of its scout sniper teams in Afghanistan posed for a photograph in front of a flag with a logo resembling that of the notorious Nazi SS. (AP Photo/knightarmco.com)  /  AP

Marine Corps Commandant Gen. Jim Amos has ordered an investigation after a platoon in Afghanistan displayed the notorious Nazi SS organization’s logo with the U.S. flag.

The logo was depicted on a flag in a photograph of a scout sniper platoon taken in September 2010 in Helmand province’s Sangin district. The Marines were with Charlie Company, 1st Reconnaissance Battalion, out of Camp Pendleton, Calif., and are shown sitting in combat gear with the U.S. flag and a blue flag with the stylized letters in the “SS” logo hanging behind them.

“On behalf of the Marine Corps and all Marines, I apologize to all offended by this regrettable incident,” Amos said Friday.

The incident has brought scrutiny to a longtime practice among members of scout sniper teams. Members have used the “lightning bolt” SS logo for years on patches, posters and tattoos, a nod toward their title. The position is exclusive to the Marines Corps; the Army has scouts and snipers, but separates their duties into two occupations.

The commandant said Friday that he has directed commanders to investigate the prevalence of the SS logo and other unauthorized symbols within the reconnaissance and sniper communities and for Training and Education Command, out of Quantico, Va., to review scout sniper school training to ensure it is clear the logo’s use is banned. ...

Yeah….Like the US is not turning into them already!
Especially that the US governments highest offices are now an occupied Territory of Israeli Zionists.
this is just one big Freudian slip!