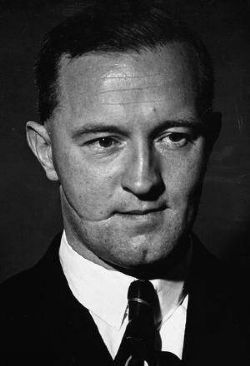 The BBC has made available on its website 15 clips from Lord Haw-Haw’s World War II propaganda radio shows broadcast from Nazi Germany. Lord Haw-Haw was the nickname coined by radio critic Jonah Barrington. While it was uncertain what German broadcaster he was talking about, the name fell on its most listened-to, William Joyce.

Joyce was born in Brooklyn, New York in 1906, but moved to Ireland at the age of three. He moved again to England in 1921, where he first became interested in Fascism. At a conservative meeting in 1923, Joyce’s group of fascists got into a brawl with another group of left-wingers. During the fighting, Joyce’s face was gashed, giving him long scar from his right earlobe to the corner of his mouth.

In 1932, he joined the British Union of Fascists and rose quickly in the organization. Joyce was a prominent speaker and soon became deputy leader of the BUF. However, his temperament ran opposite to that of the BUF’s founder and leader, Sir Oswald Mosley. His was a spirited orator, but spoke virulently, advocating violence. By 1934, Joyce’s rhetoric had become more and more anti-Semitic. He claimed his scar was caused by “Jewish communists.”

Their views diverging, Joyce was fired by Mosley from the BUF in 1937 during large scale downsizing of the organization, and he formed a splinter organization, the National Socialist League, taking about 60 BUF members with him.

In the weeks leading up to war, Joyce was tipped off that he was to be arrested for the duration of the war. He and his wife fled to Germany and within weeks, he was broadcasting Nazi propaganda daily over the airwaves. At the height of its popularity, his show drew as many listeners as the BBC and was broadcast to England and the United States. Of all the Radio Hamburg broadcasters from Nazi Germany, Joyce became the most famous, which is why the general name used for an English-language Nazi broadcaster, Lord Haw-Haw, settled on him, even though it was coined referring to someone else.

In a letter to the BBC in 1939, Aylmer Vallance of the War Office wrote, “The Hamburg broadcasts in English are becoming a definite factor affecting public morale in this country. The broadcasts are, I think you will agree, ingenious…I am not sure that the constant reiteration of Lord Haw-Haw is not having a bad effect.”

Joyce’s broadcasts lasted from 1939 to the end of the war in 1945, when he was captured and brought to Britain for trial. An American-born Irishman who took German citizenship after fleeing England, he was sentenced to death for treason under a technicality. He had lied about his heritage to get an English passport in order to vote.

Joyce was born in America,his father was Irish his mother was English and he had a German citizenship,yet he still got hanged for high treason for being a British traitor,he only wanted to go to war with the communists as he was a true National Socialist and defeat the communists he was a young man light years ahead of any other British goverment

The Jimmy Savile Row at the Smutty Beeb

BBC Historian Uncovers Nazi Past of His Own Grandfather

Lord Haw-Haw's Brother was in Contact with German Spy