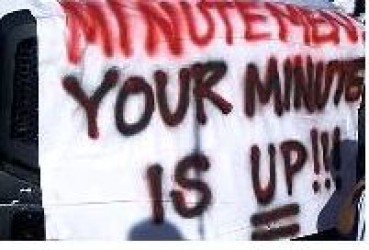 Lest anyone think the whole Bay Area is in an ecstatic froth over Barack Obama’s clinching of the Democratic presidential nomination, the Livermore Minutemen will protest Obama’s candidacy and “political racism” from 4 to 5 p.m. this Saturday, June 7 at the corner of Portola Avenue and North Livermore Avenue.

Some news releases were born to be reprinted verbatim:

Upon Hillary Clinton’s Saturday concession speach, the Minutemen will protest the official candidacy of Barak H. Obama, his radicalization of the Democract party, and the growth of Leftwing racism in the 2008 elections. Obama is being elected simply on the basis of white guilt, but he will give us a fat dose of socialism. We are asking Americans to avoid the Left and Rightwing’s framing of the race debate, and would like to present a third alternative other than the usual extremes of victimization or supremecy. Speak your voice on false white guilt, and help stop the real dangers of Free Trade and radical Statism. Bring signs and flags!

The Livermore Minutemen also invite the public to an open discussion on “Barak Obama & Political Racism of Left and Right” at 7 p.m. next Thursday, June 12 in community room B at the Livermore Public Library, 1188 S. Livermore Ave.