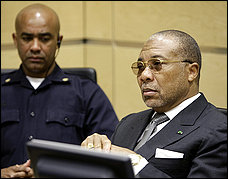 Charles Taylor is on trial in The Hague on charges of war crimes and crimes against humanity. Lobbyists who worked with Taylor said they acted out of humanitarian or religious concern. (Michael Kooren/getty Images)

UNITED NATIONS -- Charles Taylor, the former Liberian warlord and president on trial in The Hague on war crimes charges, saw the value of purchasing a good reputation in Washington.

International prosecutors say that even as Taylor terrorized West Africa in the 1990s in pursuit of power and control over the region's diamonds, gold and other natural resources, he spent millions to recruit a group of Democratic and Republican lobbyists to burnish his image abroad and secure access to powerful American politicians, including presidents Bill Clinton and George W. Bush.

Those efforts -- estimated at a cost of at least $2.6 million and involving top former state department officials, businessmen and a pastor -- ultimately failed to undo his rogue status in the West or to keep him in power.

But with the support of several influential lobbyists, he was able to routinely make his case to top U.S. policymakers. One lobbyist, Lester Hyman, organized a meeting between Taylor's wife, Jewel Howard Taylor, and Hillary Rodham Clinton, then the first lady, to discuss micro-enterprise in Africa. Hyman also sought to arrange a meeting for Taylor and President Bill Clinton along the sidelines of a U.N. General Assembly meeting, but Taylor ultimately declined to travel to New York. Hyman also met directly Madeleine K. Albright, then secretary of state, in a bid to have Taylor's criminal record cleared on charges related to his escape from a Massachusetts prison in the mid-1980s.

Hyman and several other lobbyists who defended Taylor in the United States said they were motivated primarily by humanitarian or religious concerns, not by greed or profit. "Money was never the factor. It was a great loss for me and for the firm," said Hyman, whose former company, Swidler & Berlin, received about $630,000 from Liberia from September 1997 to April 1999, according to the prosecution. "I was never representing Charles Taylor. I was representing the 3 million citizens of the country. They were the ones who were really suffering. I was trying to see if I could resolve some of the problems between the United States and the Liberian government."

But Hyman, who was awarded a concession to oversee Liberia's shipping registry, and the others also had significant economic interests in the region. The conservative evangelical preacher Pat Robertson received a 1999 concession to run a gold-mining exploration in southeastern Liberia.

Robertson, meanwhile, offered to approach top Bush administration officials on Taylor's behalf, Taylor told prosecutors. Frustrated that the United States would not do anything to prevent Taylor's fall from power, Robertson lashed out at Bush in 2003, accusing him of "undermining a Christian, Baptist president to bring in Muslim rebels to take over the country."

A spokesman for Robertson, Chris Roslan, acknowledged that Robertson was awarded the gold concession by the Liberian government but said there was no "quid pro quo" to provide Liberia with political favors in return.

U.N.-backed prosecutors have charged Taylor with 11 counts of war crimes and crimes against humanity for lending support to the brutal Sierra Leonean rebel movement, the Revolutionary United Front, which allegedly killed and maimed thousands of civilians during the country's civil war in the late 1990s. The prosecution maintains that Taylor armed the RUF in exchange for access to Sierra Leone's diamond mines. Taylor has denied the charges.

But Taylor believed his public relations strategy in Washington was bearing fruit. He credited Hyman with exploiting his contacts in the State Department to persuade Massachusetts authorities to expunge his criminal record after his escape from prison in Plymouth. "I'm sure State had something to do with it," Taylor said.

Hyman said he personally urged Albright to clear Taylor's record after he'd won Liberia's presidential elections. But he said she refused. "Madeleine Albright's position was that this is a matter that has to be resolved by the commonwealth of Massachusetts," he said. "The most Madeleine would say was that [the State Department] would abide by whatever decision the district attorney there made."

Albright, who is traveling in Russia, was not available to comment, according to a spokeswoman.

Taylor said he found other assistance in Washington, too. He said that Gen. Robert Yerks, an unpaid advocate with business interests in Liberia, had helped build support for his government from influential policymakers.

"Yes. The general as a friend of Liberia did secure some favorable actions on the part of the United States government or its representatives," Taylor said in testimony earlier this month.

Yerks served as an informal political adviser for Taylor. In a February 1999 letter, Yerks urged Taylor to improve his relations with Washington by continuing a "high-profile" effort to broker a peace deal in Liberia.

He also counseled him to destroy a cache of unusable weapons as a "magnanimous gesture" to Washington and to resolve an outstanding dispute with the U.S. oil company Mobil, whose headquarters was ransacked during civil unrest involving Taylor's fighters in 1996.

She also noted that Liberia stood to receive greater international assistance if Taylor carried out a series of reforms recommended by the International Monetary Fund aimed at eliminating government monopolies. "Protecting the business interests of foreign investors will go a long way to improve Liberia's image abroad," Rice wrote. "We are pleased that Liberia has friends who can help guide it in the right direction."

U.S. officials said that Yerks exerted no influence over Rice. "The letter from then-Assistant Secretary Rice was a statement of U.S. policy at that time, which was to press Liberia to join other key regional players in bolstering a fragile, weeks-old peace accord that halted the conflict in Sierra Leone, which had lasted many years and taken tens of thousands of lives," said Rice's spokesman, Mark Kornblau.

Shiro Ishii, the Other Doctor Mengele