The Intergraph base in HUNTSVILLE, Alabama, home of Nazi Paperclips, the conquest of space, and a very active, God-fearing Republican Army.

While fishing for data on Intergraph, an interesting connection turned up in political campaign public disclosure files – several donations from Intergraph "software scientist" (as she described her occupation in the designated box) Frances Taylor, 8811 Willow Hills Drive, Huntsville, Alabama, to an infamous Bush campaign lobby. Ms. Taylor made several contributions to the Texas-based Swift Boat Veterans for Truth in the 2004 election cycle.49 In fact, she was listed among top contributors to the well-known psyop front (it's the first mention of Swift Boaters in this investigation, but it won't be the last.)

Taylor revels in her "conservatism." She is chair of Republican Women of Huntsville.50 In May 2005, her club (located in Alabama Republican Women's District Five, where the state coordinator is Sandra Schimmelpfennig, an active Condoleeza Rice supporter who seems to have suffered a bit of cardiac arrest in the midst of the current election year and had to be placed on a respirator, sponsored a power luncheon at the swank Valley Hill Country Club. 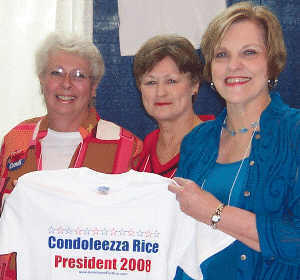 Bible-pounding Judge Roy Moore was invited to speak at the luncheon. His rumbling oratory held the gathering "spellbound," the Huntsville Times observed after the event.51

The Republican "philosophy about the relationship between God and government distinguishes them from everybody else," Moore said. 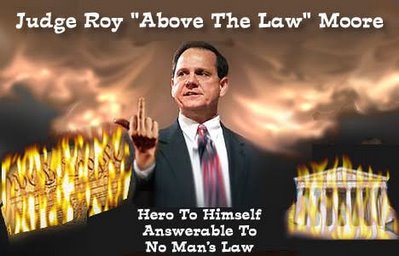 Quoting liberally from the Declaration of Independence and presidents Lincoln and Reagan, the state's highest-ranking judge stressed that the Republic is "based on the principle that citizens have God-given rights. The role of government is not to split God from everybody." 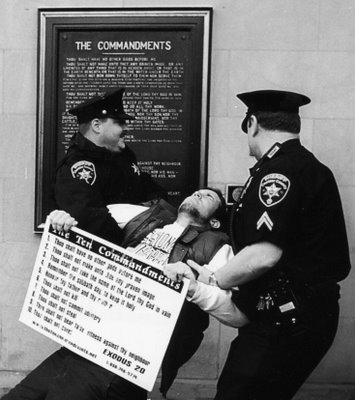 Roy Moore in his prime

Judge Moore also signed copies of his new book, So Help Me God: The Ten Commandments, Judicial Tyranny and the Battle for Religious Freedom. A career cameo: "A 1969 graduate of the U.S. Military Academy, Moore served five years in the Army. He entered law school at the University of Alabama in 1974 and was sworn in as Etowah County's first full-time deputy district attorney in 1977. He was elected circuit judge in Etowah County in 1995." Judge Moore, who once stirred a controversy by hanging the Ten Commandments on a wall in his courtroom, was victorious in his run for

the state chief justice seat in 2000. Upon assuming office, he had a 2 1/2-ton granite Ten Commandment monument moved to the lobby of the state Justice Building.

Intergraph is a conservative company, deeply entrenched in CIA-Republican scandals of various hues, a veritable rainbow coalition of felonies with ties to the upper-crust of the Bush regime.52

On May 4, 2006, the AP reported that a twin-engine DC-9 had taken off the month before from St. Petersburg-Clearwater Airport bound for Venezuela - "five days later, the plane landed at an airport in Mexico near the Gulf Coast. The Mexican Army was waiting." The authorities seized the DC-9 and 128 black briefcases labelled "private." All told, the police reportedly pulled 5.5 tons of cocaine from the plane, some $100-million worth. Scattered reports in the press soon connected the jet to Saudi-owned Royal Sons LLC, battle-scarred Tom Delay and his clîque of rich Texas Republicans, complex stock frauds, a clutch of Kentucky investors, the CIA ... and ultimately Intergraph.

The plane was licensed to SkyWays Communications. Back in 2003, SkyWay announced that the company, based in Clearwater, Florida, was "developing a unique ground to air in-flight aircraft communication network that it anticipates will facilitate homeland security and in-flight entertainment. SkyWay Aircraft is focused on bringing to the market a network supporting aircraft-related service including anti-terrorism support, real time in-flight surveillance and monitoring."54 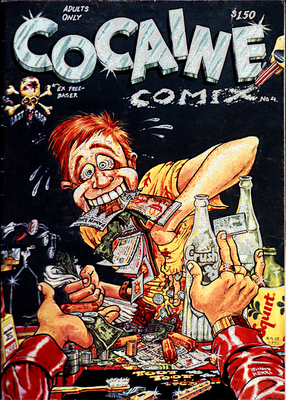 That put the mind at ease ... a CIA-Republican narco-terrorist cell spying on the hapless proletariat ... but there was more neo-conservative Orwellianism at play here: "SkyWay Communications Holding Corporation (OTCBB:SWYC), and its wholly owned subsidiary, SkyWay Aircraft, Inc. are very pleased to announce that Mr. Brent C. Kovar, president and the developer/inventor of the high-speed communications transfer technology utilized by SkyWay, has been appointed to serve on the National Republican Congressional Committee Business Advisory Council."

Congressman Tom Delay, majority Leader, appointed Kovar. The appointment was "in recognition of his valuable contributions and dedication to the Republican Party." Kovar was "expected to play a crucial role in the Party's efforts to involve top business people in the process of government reform both at the state and federal levels."55

SkyWay was not your average, work-a-day airline. It was an intelligence front. When Florida Cuban-Republican Senator Mel Martinez struck out on his 2004 two-day "American Dream Tour," he leased a 45-foot motor coach "used by rock groups and country music stars," the St. Petersburg Times reported, and "switched to a DC-9 charter jet owned by Skyway Global, a Clearwater *SECURITY FIRM* whose owners are Martinez supporters."56

A year later, SkyWay Communications Holdings filed for Chapter 11 after throwing away, since its inception in 2002, $40-million. The crash of Clearwater-based Skyway and its subsidiaries left behind a "a trail of tangled litigation and angry investors," according to the Tampa Bay Business Journal on May 26, 2005, "including 24 Kuwaiti and Saudi nationals and a group

of 90 shareholders in Kentucky" who charged that they'd invested "retirement savings and college funds" in a company "that promised to protect airplanes from terrorism ... "57

And what was Kovar's actual product? The journal described the beating heart of SkyWay: "Skyway Communications Holdings was based on a algorithm Tierra Verde resident Brent C. Kovar patented that was designed to revolutionize wireless communication for security and entertainment on airplanes." An algorithm. From this revelation, you might draw the conclusion that Kovar was running a series of sham corporations that served no other purpose than procuring post-9/11 defense contracts earmarked by well-lobbied congressmen, such as this one in partnership with San Diego's Titan Corporation, an appendage of L-3: "SkyWay Communications Holding Corp. and the Titan Corporation have entered into a teaming agreement for Titan to sell Skyways's high-speed airborne network services to the U.S. Government for use with selected military and homeland security applications. ... "58 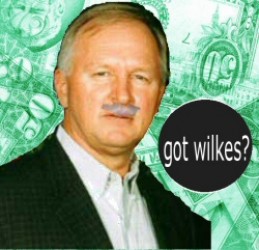 The San Diego Union-Tribune reported in December that Wilkes "graduated from Hilltop High School in 1972, along with his football teammate and best friend Kyle Dustin 'Dusty' Foggo." Wilkes and Foggo were "roommates at San Diego State University," and "best men at each other's weddings and named their sons after each other. Wilkes' career in political relations dates to the early 1980s, shortly after Foggo joined the CIA. Foggo was sent to Honduras to work with the Contra rebels who were trying to topple the Sandinista government of Nicaragua."59

The Iran-contra Veterans for Sedition were back. Cocaine politics. CIA fronts. In the reactionary South ...

Mo Brooks in his bid for Alabama Lt. Governor, but he

failed to make the preliminary cut. Brooks, a devout

52.) Including Colin Powell. He was the keynote speaker at the annual Intergraph Users Conference, held at the Walt Disney World Coronado Springs Resort and Convention Center in June 2006. During Operation

Desert Storm, Powell was chairman of the Joint Chiefs of Staff, a period when geospatial technology was just emerging. He began using the technology to train for battle, Powell told the conference attendees. "If you knew where everyone was, you could see the whole battlefield," Powell said. (The DoD has been pushing in recent years for a highly-sophisticated surveillance system/contractor boondoggle that would provide a "God's eye" view of military engagements.) "I learned how technology could save lives in a

Research, and then passed to PSINet, and then to Metamor," etc.

Ted Cruz: Friend to Fascists, Past and Present