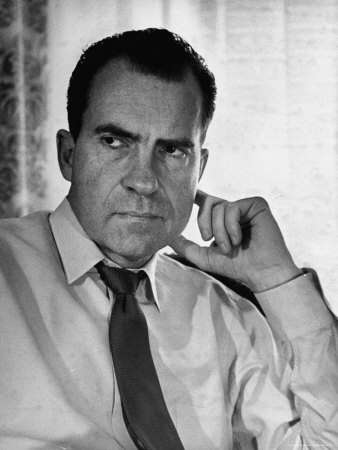 WASHINGTON — Americans may have one last chance to kick Richard Nixon around: US historians have filed a suit seeking the release of testimony from disgraced former president on the Watergate scandal.

The president widely derided as "Tricky Dick" was elected in 1968 and re-elected four years later, but resigned in disgrace in August 1974 for his administration's role in a burglary of the Democratic National Committee headquarters at the Watergate complex in the US capital.

The scandal -- including the White House's attempts at cover-up -- ultimately led to Nixon becoming the first US president to resign in disgrace.

Republican Nixon was pardoned by his successor, Gerald Ford, and died in 1994 without the full extent of his role in the scandal ever known. Several of Nixon's top aides however were tried and convicted, and some spent time in prison.

A group of historians has filed a petition in US District Court to release recordings made by a grand jury that interviewed Nixon without his attorney in June 1975.

The ex-president was interviewed under oath at his home in San Clemente, California, where he retired after resigning. ...

The "burglars" in the Watergate scandal were really political operatives seeking to plant listening devices to spy on the Democrats during an election campaign, were tried and found guilty.

Nixon "was questioned about what he knew about 18 and half minutes gap in a famous tape recording of a conversation between himself and his chief of staff after the break-in," Zieve said.

He was asked about using the tax authority, the Internal Revenue Service (IRS) to harass his political enemies, as well as "a large campaign contribution ... to a close friend. There was a controversy of whether it was for the campaign or just a bribe," Zieve said.

"We expect other topics we can't anticipate," Zieve added. "He spoke for 11 hours over two days, so the only way we can find out is to see it". ...