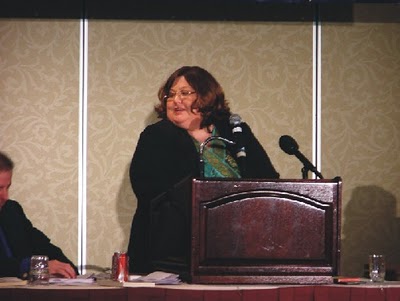 To the media, she’s the stereotypical “mom” who “scoops al-Qaida” with her videos, but Internet terror tracker Laura Mansfield is not the simple, doddering housewife the press makes her out to be.

Crime Library bio: “She is fluent in written and spoken Arabic, and has an excellent understanding of the complex cultural, religious, and historical issues. She spent nearly 7 years living and working in the region, for a wide range of clients including the United States Embassy, the United States Agency for International Development, and various international corporations. She was active in the embassy warden system, acting as a liaison between the Embassy security office and her employer during the days of the Beirut hijacking. … She is proficient in a variety of programming languages, and has consulted for a variety of Fortune 100 clients throughout the past decade.” http://www.crimelibrary.com/about/authors/mansfield/

AP: WASHINGTON—Once her three kids are off to school, Laura Mansfield settles in at her dining room table with her laptop and begins trolling Arabic-language message boards and chat rooms popular with jihadists. Fluent in Arabic, the self-employed terror analyst often hacks into the sites, translates the material, puts it together and sends her analysis via a subscription service to intelligence agencies, law enforcement and academics. Occasionally she comes across a gem, such as when she found a recent Osama bin Laden video—before al-Qaida had announced it. …

Mansfield writes for CIA propaganda fronts: “Laura Mansfield is an American author specializing in counter-terrorism, the Middle East, Islam, and Islamic terrorism. She is the former Associate Director of the Northeast Intelligence Network. Mansfield writes for various online publications including WorldNetDaily and FrontPageMag.”

Mansfield’s Northeast Intelligence Network, a commercial, anti-Islamist propaganda website with extensive intelligence ties: “The Northeast Intelligence Network is comprised of a network of veteran, licensed professional investigators, analysts, military affairs specialists and researchers who have combined their resources in response to the September 11, 2001 attacks on the United States by Islamic terrorists. Team members volunteers their time and combine their expertise to fill a specific niche in the private sector to research, investigate and analyze potential terrorist threats that continue to face the United States. Each professional member of the Northeast Intelligence Network excels in their various fields of expertise and has a proven track record of successes.”

Intelligence Connections: “The Northeast Intelligence Network is now listed on the Official NATO STARnet DTIN (NATO Defense Against Terrorism Information Node) webpage. The NATO node is designed to be a single point of access for information pertaining to defense against terrorism interests of NATO elements, NATO member countries, and partner countries. All agencies and organizations are listed in alphabetical order. “The Northeast Intelligence Network is honored to be listed with such intelligence organizations such as the CIA, NSA and a host of government and industry giants. It is a tremendous acknowledgment of which we are very proud.”