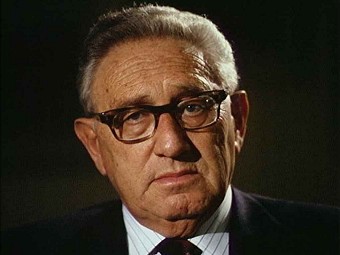 Henry Kissinger, the pioneer of Cold War detente during the Nixon era, has made a return to frontline politics after President Barack Obama reportedly sent him to Moscow to win backing from Vladimir Putin's government for a nuclear disarmament initiative.

The Daily Telegraph has learned that the 85-year-old former US secretary of state met President Dmitry Medvedev for secret negotiations in December. According to Western diplomats, during two days of talks the octogenarian courted Russian officials to win their support for Mr Obama's initiative, which could see Russia and the United States each slashing their nuclear warheads to 1,000 warheads.

The decision to send Mr Kissinger to Moscow, taken by Mr Obama when he was still president-elect, is part of a plan to overcome probable Republican objections in Congress.

Mr Kissinger is believed to have won a verbal rather than written undertaking for the deal. Tom Graham, a senior associate at Kissinger Associates and a former member of the national security council in the White House, on Thursday confirmed that Mr Kissinger had met Mr Medvedev but denied that any negotiations had taken place and said he had not met with Mr Putin.

However, a diplomatic source said that Mr Kissinger held two days of talks with Mr Putin at his country house near Moscow.

While the details of the ambitious initiative are yet to be revealed, the proposal to return to the negotiating table after eight years of reluctance in Washington has been welcomed in Britain and elsewhere.

Mr Obama apparently chose Mr Kissinger for his consummate diplomatic skills and his popularity in Moscow, an affection earned by his open acknowledgment of Russia's international resurgence.

Despite his pariah status with many Left-wingers in Mr Obama's Democratic Party, the president forged relations with Mr Kissinger during his campaign. The compliment was returned when the 85-year-old veteran of the Nixon and Ford administrations said last month that the young president was in a position to create a "new world order" by shifting US foreign policy away from the hostile stance of the Bush administration.

He publicly supported Mr Obama's notion of unconditional talks with Iran, though not at the presidential level.

Further demonstrating his willingness to work with his opponents on foreign policy issues, Mr Obama turned to two veteran Republicans steeped in Cold War experience to press home his plans.

Observers say signs of progress towards a new treaty could come as early as this weekend, when senior government officials meet at a security conference in Munich.

Joe Biden, the US vice president, is expected to address the conference and diplomats hinted he could announce the suspension of plans to erect a missile defence shield in central Europe, a project that has been frequently denounced in Moscow.

Despite widespread praise for the proposals, many European officials are privately urging the United States to be cautious, aware that Kremlin policy towards the West in recent years has been characterized by reversals. Apart from worries over Russia's increasingly belligerent international policies, there is also little doubt a disarmament deal would benefit Moscow more than Washington -- even if the Kremlin has threatened to stall talks on a new treaty in the past.

Russia has long called for a new agreement to replace the 1991 Strategic Arms Reduction Treaty (START), which expires on Dec 5. Under START, the two Cold War adversaries agreed to halve their stockpiles to 5,000 warheads apiece. An addendum negotiated in 2002 under the START framework saw both sides agree to cut the number of warheads in service to between 1,700 and 2,200 each.

Despite pressure from Moscow, the Bush Administration was reluctant to begin negotiations on a successor to START because it feared losing the flexibility needed to respond to potential challenges from rising nuclear powers such as China.

The Kremlin, on the other hand, has been desperate for a new treaty because Russia's dilapidated nuclear stockpile is no longer sustainable either financially or practically.

Despite developing a new class of intercontinental ballistic missiles, the bulk of Russia's arsenal has passed its sell-by date. Even though many warheads have been kept alive artificially, Russia has long been aware that most of its missiles will have to be decommissioned much faster than they can be replaced.

Nuclear parity, the crux of Moscow's defence policy, is therefore fiction in all but name. A new treaty, however, would allow Russia to compete and free up money for other armament programmes.

In return for a new disarmament deal, Mr Putin has demanded that the United States delay Nato membership for Ukraine and Georgia as well as shelving the missile shield, which Moscow believes is directed at Russia rather than Iran.

The United States is reportedly ready to accept those demands after Mr Kissinger, who is deeply respected for his recognition of Russia's resurgence, may have won concessions of his own, a diplomatic source said.

Frequent visits by Mr Kissinger to Russia since 2000 have largely gone unreported in the Western press. But in 2007, the Russian news agency Novosti reported that Mr Kissinger and Yevgeny Primakov, a former KGB master, were appointed by Mr Putin to co-chair a bilateral "working group" of Russian and American political insiders to tackle issues such as global terrorism, nuclear proliferation, and nuclear threats.

Mr Putin is understood to have signalled his willingness to drop Russian objections over tougher sanctions against Iran and could also suspend the sale of sophisticated air defence missiles to Teheran which Washington fears could hamper a military strike against the country's nuclear installations.