Just Like 9/11? Oil Spill Responders Are Getting Sick … but are Told They Don’t Need Safety Gear 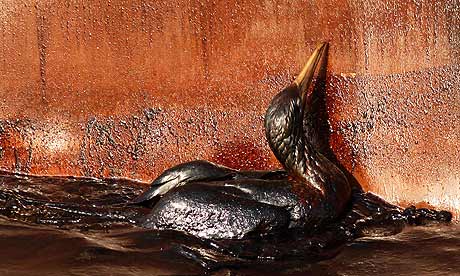 Local fishermen hired to work on BP’s uncontrolled oil leak in the Gulf of Mexico are scared and confused. Fishermen here and in other small communities dotting the southern marshes and swamplands of Barataria Bay are getting sick from the working on the cleanup, yet BP is assuring them they don’t need respirators or other special protection from the crude oil, strong hydrocarbon vapors, or chemical dispersants being sprayed in massive quantities on the oil slick.

Fishermen have never seen the results from the air-quality monitoring patches some of them wear on their rain gear when they are out booming and skimming the giant oil slick. However, more and more fishermen are suffering from bad headaches, burning eyes, persistent coughs, sore throats, stuffy sinuses, nausea, and dizziness. They are starting to suspect that BP is not telling them the truth.

And based on air monitoring conducted by the Environmental Protection Agency (EPA) in a Louisiana coastal community, those workers seem to be correct. The EPA findings show that airborne levels of toxic chemicals like hydrogen sulfide, and volatile organic compounds like benzene, for instance, now far exceed safety standards for human exposure.

There is no excuse for sick people. BP and the federal agencies charged with worker safety know that the risks of working on a hazardous waste cleanup are extraordinarily high and that it will take a concerted effort to keep workers safe and healthy. Further, it will take an equally extraordinary effort by BP and the federal government to protect public health in coastal communities downwind or downstream from the toxic stew in the Gulf.

Yet I don’t see either BP or the federal government taking sufficient–or any–action to prevent human tragedy in the form of acute and likely long-term illnesses from its uncontrolled leak.

Previous Article
FDA Transparency Could Tank Pharma Stocks
Next Article
Israel and African Apartheid: A Marriage of Convenience and Military Might

Israel and African Apartheid: A Marriage of Convenience and Military Might
May 23