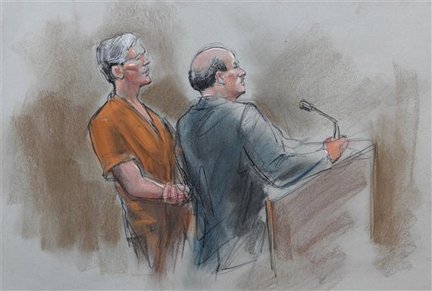 Federal prosecutors today argued in a court document that their office has met the threshold for the detention of nine members of the Hutaree militia group charged with seditious conspiracy even if they did not yet prove imminent harm to the government.

Questions about the prosecution’s case arose today during a bond hearing in which U.S. District Judge Victoria Roberts asked prosecutors “”What is it that makes it clear there was a planned attack on law enforcement?”

She was specifically concerned about the seditious conspiracy charge, which is the main reason all nine defendants have been held without bond since their arrests in March.

Assistant U.S. Attorney Ronald Waterstreet responded today in a memorandum that Hutaree’s central goal, as pointed out in the indictment, was “commit some violent act to draw the attention of law enforcement or government officials which would prompt a response by law enforcement.”

He said the group’s suspected leader David Stone Sr., 45, of Clayton, preached the need for an uprising against the government.

“There is no requirement that the United State establish that there was an imminent harm,” Waterstreet wrote. “Rather, that it must simply show an agreement to oppose by force the authority of the United States.”

Stone’s attorney William Swor, said he hadn’t yet seen the memorandum, but pointed out that he argued in court today that “all these people were doing were talking.” Defense lawyers have argued that there was no grand plan to harm any one and some of the tapes played to Roberts sound like people talking over each other in a local bar.

Prosecutors also said that Stone talked about secret training exercises in April inside a “hostile area.” Stone had told others that anyone who stumbled upon the training and interfered should be put down with bullets or knives, Waterstreet said.

“The Hutaree believe that this engagement would then serve as a catalyst for a more widespread uprising against the government,” he wrote. “The facts presented do not reflect mere advocacy, but rather speech-related conduct which includes the agreement of two or more persons to levy war against the United States.”

“I completely disagree with the government’s interpretation of what’s required to establish sedition,” he said. “You’ve got to show imminent danger. People sit around and talk all kinds of stuff every day in this country.”

UK: University of Leicester Lecture – Expansionism in the Third Reich
May 09