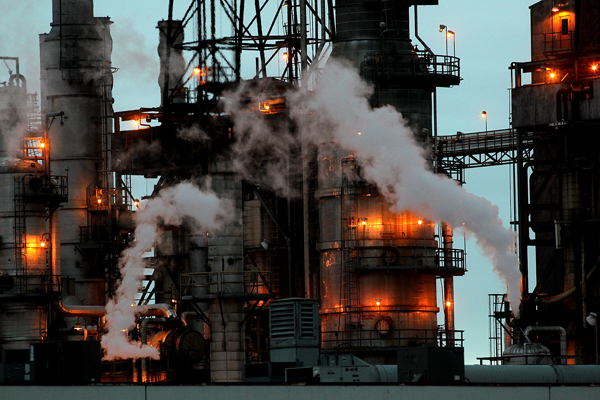 Valero’s Wilmington refinery, near the Port of Long Beach. The company was the main funder of Proposition 23, a ballot initiative to suspend California’s global-warming law. And it would be among 600 industrial facilities covered by the state’s cap-and-trade program. Christina House /Los Angeles Times

A  San Francisco superior court judge has put California’s sweeping plan to curb greenhouse gas pollution on hold, saying the state did not adequately evaluate alternatives to its cap-and-trade program.

In a 35-page decision, Judge Ernest H. Goldsmith said the Air Resources Board had failed to consider public comments on the proposed measures before adopting the plan, which affects a broad swath of the state’s economy.

In particular, the judge noted, officials gave short shrift to analyzing a carbon fee, or carbon tax, devoting a “scant two paragraphs to this important alternative” to a market-based trading system in their December 2008 plan.

The air board said it would appeal the judge’s decision, which was filed late Friday and released Monday.

The potential setback in California, the first state to enact a broad global warming law, comes amid heightened nationwide controversy over how to curb the gases that trap heat in Earth’s atmosphere, and change climates.

A greenhouse gas bill passed the U.S. House last year, but failed in the Senate after intense opposition from the coal and oil industries. With the election of more business-oriented politicians last November, the measure is considered dead in the short term.

In the November election, however, Californians voted down a oil-refinery-sponsored ballot initiative to delay the state’s global warming law, which is touted as a spur to California’s fast-growing renewable energy industry. The 2006 law requires the state to cut its greenhouse gas emissions to 1990 levels by 2020.

The California lawsuit was filed by six environmental groups that represent low-income communities, including the Association of Irritated Residents, based in the San Joaquin Valley, and Communities for A Better Environment, which fights pollution around the ports of Los Angeles and Long Beach.

The groups contend that a cap-and-trade program would allow refineries, power plants and other big facilities in poor neighborhoods to avoid cutting emissions of both greenhouse gases and traditional air pollutants.

“This decision is good for low-income communities like Wilmington, Carson and Richmond,” said Bill Gallegos, executive director of Communities for a Better Environment. “It means that oil refineries, which emit enormous amounts of greenhouse gases and contribute to big health problems, cannot simply keep polluting by purchasing pollution credits, or doing out of state projects.”

California’s cap-and-trade program was strongly backed by Gov. Arnold Schwarzenegger over the objections of groups that prefer direct regulations, or a carbon tax, on industrial polluters. Under the market-based system, companies can meet their obligations by purchasing credits from other companies, or from projects such as forest preservation that cut pollution more cheaply.

“Claims of environmental harm from a program of tradable allowances for greenhouse gases are unfounded,” the Air Resources Board said in a statement on the judge’s decision.

The board’s attorneys will meet with plaintiffs about complying with the order without halting all aspects of its global warming plan. Besides the cap-and-trade program, which covers 600 industrial plants, the plan includes rules to curb the carbon intensity of gasoline production and distribution, slash motor-vehicle emissions and control potent greenhouse gases such as refrigerants.

“We believe plaintiffs did not intend to put on hold efforts to improve energy efficiency, establish clean car standards and develop low carbon fuel regulations,” the board said. Such a “broadly written” order, “puts at risk a range of efforts to move California to a clean energy economy,” it added.

Legislation has been introduced in Congress backing carbon fees over cap-and-trade systems, and a carbon tax is enjoying widespread support in British Columbia, where it is offset by cuts to other taxes. But the administration of California Gov. Jerry Brown has given no indication of whether it would be open to similar alternatives.

Politically influential green groups, such as the Environmental Defense Fund, the Nature Conservancy and the Natural Resources Defense Council have backed a cap-and-trade approach, and did not join the lawsuit by environmental justice groups.

Will California companies offset their carbon emissions with Mexican forests?