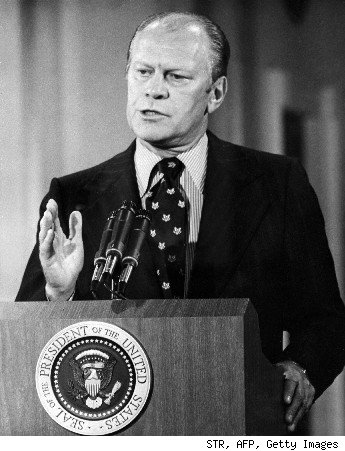 President Gerald Ford secretly authorized the use of warrantless domestic wiretaps for foreign intelligence and counterintelligence purposes soon after coming into office, according to a newly declassified document.

The Dec. 19, 1974 White House memorandum, marked Top Secret/Exclusively Eyes Only and signed by Ford, gave then-Attorney General William B. Saxbe and his successors in office authorization "to approve, without prior judicial warrants, specific electronic surveillance within the United States which may be requested by the Director of the Federal Bureau of Investigation."

In giving the attorney general warrantless wiretap authority, Ford said he was "satisfied that programs requiring such surveillance are important to national security" and chose to "reaffirm and renew" such powers. It is unclear how widely, if at all, the authority was used to spy on Americans or others living in the United States.

"I have been advised by you [Saxbe] and by the Department of State that such surveillance is consistent with the Constitution, Laws and Treaties of the United States," Ford wrote about four months after Richard Nixon's resignation, which was brought on by the Watergate scandal and revelations that Nixon authorized domestic eavesdropping.

In 1975, the U.S. Senate held what became known as the Church Committee hearings, named for Sen. Frank Church of Idaho, which further exposed warrantless wiretaps and other electronic surveillance of Americans.

Despite authorizing wiretaps for national security reasons, Ford believed strongly in privacy rights. Previously declassified 1976 White House documents from his administration show that the then-president favored a proposed law to govern electronic surveillance, according to the National Security Archives at George Washington University, which first obtained those records. Ford supported the legislation despite objections from then-Secretary of Defense Donald Rumsfeld and then-CIA director George H.W. Bush.

The newly released memo was declassified by the State Department and authorized for release on March 16 by the National Archives. The memo, obtained through the federal Freedom of Information Act, was shared with the nonprofit Center for Investigative Reporting in Berkeley, Calif.

John Laprise, a visiting assistant professor in the communications program at Northwestern University who first obtained the memo, said in an interview that the document brings to light previously unknown information about the Ford administration's policy on warrantless wiretaps.

"Ford was completely motivated by defending against the Cold War threat of the Soviet Union," Laprise said. "This could be Bush after 9/11 or Obama after becoming president, but it's President Ford 35 years ago, coping with Cold War struggles. It's really a stunning document that raises all sorts of questions."

Ford was a strong advocate of an individual's right to privacy, but believed his responsibility as commander in chief was first to protect U.S. citizens from foreign surveillance, Laprise said. The warrantless wiretap authority Ford gave was essentially to spy on -- and counter -- Americans or foreigners in the United States who were spying for foreign countries or political groups, he said.

The memorandum has no rescission date, but Ford directed the attorney general "to advise me of any changes in statutes or of relevant judicial decisions bearing on these matters."

The memo said the attorney general must personally approve a warrantless electronic surveillance request, which must satisfy several conditions: to protect against attacks or hostile acts by a foreign power; to obtain foreign intelligence information "deemed essential" to national security; to protect against foreign intelligence activities, or to obtain information which the secretary of state or the national security adviser certified as necessary for foreign affairs.

The controversy surrounding warrantless wiretapping was renewed after revelations in 2005 that President George W. Bush in 2002 secretly authorized domestic eavesdropping on Americans. At a Jan. 26, 2006 news conference, Bush said that past presidents had relied on "the same authority I've had" in order to "use technology to protect the American people," according to the New York Times.

A federal judge this week ruled that the National Security Agency violated the 1978 law by electronically eavesdropping on an Oregon-based Islamic charity without a warrant from the federal surveillance court. Although President Obama was critical of the Bush-era policy during the 2008 presidential campaign, his administration has since tried to dodge the issue.

Steven Aftergood, the director of the Federation of American Scientists' Project on Government Secrecy, noted that Ford's memo to "reaffirm and renew" the warrantless wiretap authority given to the attorney general implied that he was perpetuating rather than initiating the surveillance program. He also said it's astonishing that the document was not declassified until 2010.

"It memorializes the practice of unchecked domestic surveillance," he said. "Clearly there are gaps in the record, and there are new revelations to be discovered, even about events from 40 years ago."

Andrew Becker is a reporter with the nonprofit Center for Investigative Reporting in Berkeley, Calif. He has written and reported for the New York Times, Washington Post, Los Angeles Times and National Public Radio.