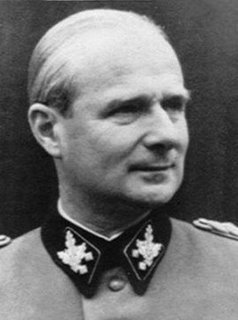 "[Allen] Dulles' co-conspirator on the German side is SS Obergruppenfuhrer Karl Wolff, head of the Gestapo in Italy, formerly SS chief Heinrich Himmler's right hand man and a personal confidante of Adolf Hitler. In the post-war years, Wolff's cozy relationship with Allen Dulles will spare him from the dock at Nuremberg, but when it is later revealed that he 'dispatched at least' 300,000 Jews to be 'exterminated' at the Treblinka death camp, a feat which would doubtlessly have endeared him to the virulently anti-Semitic Dulles, he is tried and handed a token sentence."

An Absurdist Film That Touches on Wartime Reality

Charles T. Pinck, president of the O.S.S. Society, an organization of veterans of the Office of Strategic Services, the World War II predecessor of the C.I.A., argued in the Washington Times that the film Inglorious Basterds loses its pretense as a fantasy when it attaches a fictional group of Jewish commandos to the real O.S.S., thereby giving the viewer the impression that this story is true.

“The fictional Basterds may serve the film’s purpose,” Mr. Pinck asserts, “but they do disservice to the history of the O.S.S.”

Mr. Pinck would be surprised to learn that certain episodes of the film are in fact closer to the history of the O.S.S. than they appear, closer perhaps than even the film’s director, Quentin Tarantino, would admit.

Mr. Tarantino reportedly struggled with the ending of the film, until he found a solution that mirrors obscure events in the last days of World War II.

The so-called Jew Hunter, Colonel Hans Landa, splendidly played by Christoph Waltz, is a thinly fictionalized portrayal of Obergruppenführer Karl Wolff, who between 1936 and 1943 was chief of staff to the head of the SS, Heinrich Himmler, principal SS liaison officer with Hitler’s headquarters, and plenipotentiary of all SS and Wehrmacht forces in Northern Italy at the end of the war.

The second highest-ranking SS officer to survive the war, Wolff was not among the defendants at the Nuremberg war crimes trials, despite his involvement in the deportation of Poles to the Treblinka concentration camp in the summer of 1942, despite the role he played in the deportation of Jews from Rome to Auschwitz, and in the medical experiments in Dachau, and in the sterilization experiments conducted on women and children in Ravensbrük. 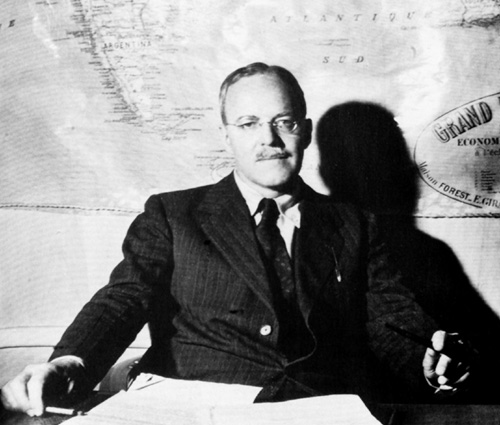 He avoided prosecution, most probably through the intervention of Allen Dulles, the head of the O.S.S. in Europe and the longest serving director of the C.I.A. The release of C.I.A. files under the 1998 Nazi War Crimes Disclosure Act substantiated what historians have long suspected: Dulles had promised immunity to the SS general before the end of the war.

Like the SS colonel played by Waltz in the film — who negotiates full immunity, a military pension, U.S. citizenship and property on Nantucket Island in exchange for ending the war (by letting the Basterds kill the entire German high command, including Hitler) — Wolff negotiated the surrender of the SS and Wehrmacht forces in Northern Italy with Allen Dulles. The scene of the negotiations was Switzerland (Dulles was stationed in Berne), not France as in Inglorious Basterds. Still, as Neal Ascherson wrote two decades ago on the pages of the London Independent,

“By selling his armies to the Americans in 1945, Karl Wolff bought immunity, apart from a brief confinement. ... This old man’s sunny leisure dishonored both the dead and the living.”

The secret negotiations, called “Operation Sunrise,” were of high importance, as the German Army group stationed in Italy in April 1945 still had about 800,000 soldiers, and General Eisenhower did not want to lose forces in an effort to bypass the so-called Alpine Fortress between Italy and Austria at the time of the battle for Berlin.

Dulles, in his memoir, The Secret Surrender, wrote that his aim was to save lives and to protect historic sites. But stopping the Soviets from occupying Northern Italy was as crucial as thwarting the Italian Communist partisans from taking power after the war. Although the Soviets had been informed about the talks they were excluded from the negotiations.

We know from contemporary sources that the Soviets took the issue seriously and accused the Allies, especially the Americans, of secretly cooperating with the SS. President Roosevelt, in his last telegram to Stalin before his death, tried to reassure Stalin that the negotiations were not directed against the Soviets. Historians speculate that the Cold War in fact started with the negotiations between Wolff and Dulles on March 8, 1945, in Lucerne.

The German surrender in Northern Italy finally took effect on May 2, 1945, just six days before VE-Day, the end of World War II in Europe.

Even if the Cold War did not start with “Operation Sunrise,” the long-lasting effects of the secret surrender were not trivial. The secret dealings between the American intelligence services and the SS in Switzerland made the Soviets paranoid about Dulles, and about clandestine contacts between Soviet operatives and the Americans, and served as a pretext for the onset of the Cold War. Neutral Switzerland, bordered by Nazi Germany, Austria, Fascist Italy and occupied France, was not only the headquarters of the European operations of the U.S. secret services but also the hub of Soviet spy networks in Western Europe.

In 1973, when the Soviets produced their first television miniseries, “The 17 Moments of Spring,” the story centered around a Soviet agent whose assignment was to stop negotiations between Karl Wolff and Allen Dulles during the final months of World War II. In the series, Dulles acts without the authorization of the U.S. president in order to prevent the disarmament of Nazi forces and thwart the victory of Bolshevism in Northern Italy. The series was broadcast with immense success all over Eastern Europe and has been repeatedly broadcast ever since, even after the collapse of the Soviet Union.

Wolff was tried in 1948, but was almost immediately released from prison. During the Eichmann trial in 1962, evidence once more surfaced about Wolff’s role in deporting 300,000 Polish Jews, the deportation of Italian Jews, and ordering and witnessing with Himmler the murders of partisans in Belarus together with Himmler (a 1970s interview with Wolff is available on YouTube). He was sentenced in 1964 — when Dulles was no longer the head of the C.I.A. — to 15 years imprisonment, but due to ill health he was released in 1969. He then lived the life of a retired citizen in Austria, lecturing about the SS and writing his memoirs. Before his death in 1984, he played a role in the case of authenticating the Hitler diaries, which turned out to be forgeries.

Dulles had a liking for Wolff, whom he described as “trustworthy,” “extremely good-looking,” “aristocratic” and even “Goethe’esque” — whatever he meant by this.

At the end of Inglorious Basterds, when, according to the immunity agreement, Lt. Aldo Raine (played by Brad Pitt) releases Hans Landa, he tattoos a Swastika on the forehead of the SS officer to prevent him from denying his Nazi past. For Karl Wolff, however, it never occurred to disavow who he was. When a prison guard forbade him to wear his SS insignia he went on a hunger strike; he found nothing to be ashamed of in his past.

Dulles evacuated thousands of Nazi war criminals, not just Wolf. Operation Paperclip provided safe haven in the US for rocket scientists, spies, engineers, mass murderers and doctors. The CIA wanted their “expertise” on our side in the Cold War. These Nazis gained access to and influence in our military-industrial complex after WWII; thus, we also imported and assimilated their wretched, poisonous ideology.

Long-Suppressed By The U.S. Government, This Nuremberg Trials Documentary is Finally Being Shown Outside Germany