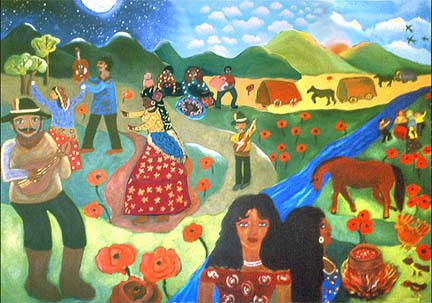 ALMOST 300 Roma have fled their homes in Hungary in fear of far-right vigilantes, creating fresh problems for a government facing international criticism over a new constitution and media law.

The Red Cross evacuated the Roma from the village of Gyongyospata after a paramilitary group called Vedero , or Defence Force, organised a training camp and planned exercises there over the Easter weekend.

Defence Force is one of several nationalist volunteer units that have launched patrols recently through villages with large Roma communities, amid persistent tension between Hungary’s gypsies and right-wing groups that blame them for crime and violence.

“We had called on the Red Cross to help evacuate these people. They are scared and they want to be safe for the Easter holiday,” said Roma activist Aladar Horvath.

“Holding war games by Defence Force during the Easter holiday goes beyond anyone’s imagination. The government is standing by, meanwhile, doing nothing. Police were ordered to Gyongyospata with a huge delay.”

The situation is extremely problematic for Hungary’s conservative government, which holds the rotating presidency of the European Union and is often accused by critics of doing too little to help the country’s Roma and of pandering to nationalist sentiment.

“The maintenance of order is the exclusive monopoly of the state,” said Peter Szijjarto, a spokesman for prime minister Viktor Orban. “The state will in no way share this right.”

Defence Force and similar groups, and the far-right Jobbik party that came third in last year’s general election, deny they are racist and say “patriotic” Hungarians are forced to fend for themselves because a weak police service leaves them prey to “gypsy crime”.

Six Hungarian Roma were murdered in allegedly racist attacks in 2008-2009, but the violence did little obvious damage to the popularity of the country’s ultra-nationalists.

The latest incident will increase pressure on a government that has weathered fierce foreign criticism in recent months over a tough new media law, a deeply conservative new constitution and other moves that concentrate huge power in the hands of the ruling Fidesz party.

Opponents of the constitution – which include Amnesty International and Human Rights Watch, while several governments have also raised concerns – say it was prepared too quickly and with too little discussion and could lead to discrimination against a host of minority groups and dramatically weaken vital checks and balances on the government.

The Council of Europe has requested expert analysis of the constitution, while United Nations secretary general Ban Ki-moon has urged Hungary to seek international advice on the document.

“We are observing developments in Hungary with much attention and some worry,” Germany’s deputy foreign minister Werner Hoyer said this week.

“The media law adopted at the start of the year shows an attitude towards fundamental rights which – despite some amendments – is hardly compatible with European Union values.”

it is to our shame that we must ask for help from those who are potentially allied with those wishing harm to our people. havent we evolved enough as a people to organize in our own deffence? or shall we forever be begging little rabbits. arent there others that feel the way i do or am i insane?

The European Parliament's Hand-Out to the Far-Right