" ... Over a period of two years, from 2007 to 2009, Potter says insurance companies and HMOs spent $586 million, derived from customers’ premiums, in political contributions and lobbying expenses, most of it to attack health-care reform. ... "

Former Knoxvillian was one of the health-insurance industry’s top fearmongers—until he decided to blow the whistle.

The name Wendell Potter has begun to pop up here and there in the national media and in political debates, almost like a metaphor. The former health-insurance insider testified before the Senate about his industry’s influence on public policy in 2009, and two months ago released a book, a personal memoir of the life of a health-insurance-industry flack, offering an unusual glimpse into the inner workings of an effective propaganda machine. ...

Potter claims insurance companies were deliberately responsible for twisting the public dialogue of the health-care debate, secretly backing “grassroots” organizations of citizens angered and mobilized by exaggerations and distortions. He includes, specifically, the tea party movement as a spawn of insurance-company propaganda, quoting figures concocted by insurance-company consultants. He cites some specific rhetoric concerning “death panels” and “government takeover” and “socialism” as useful parts of an anti-reform “playbook.” He knows, he says, because he wrote some of that playbook himself.

As the top publicity executive for CIGNA, one of the giants of America’s health-insurance industry, Potter was, until his quiet resignation in 2008, one of the industry’s chief propagandists in the fight against sweeping health-care reform. 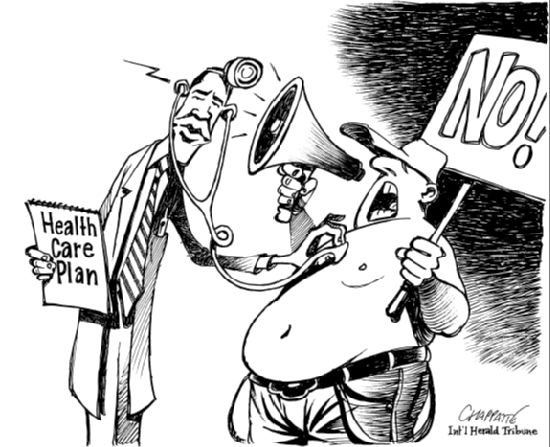 He writes, “if you are among those who believe that the United States has ‘the best health care system in the world,’ despite overwhelming evidence to the contrary—it’s because my fellow spinmeisters and I have succeeded brilliantly at what we were paid very well to do, with your premium dollars. In fact, the United States ranks 47th in life expectancy at birth, behind Bosnia.” ...

Over a period of two years, from 2007 to 2009, Potter says insurance companies and HMOs spent $586 million, derived from customers’ premiums, in political contributions and lobbying expenses, most of it to attack health-care reform.

Perhaps the height of that absurdity was the insurance industry’s frantic response to one motion picture. Long before the popular release of Michael Moore’s pointed but sometimes loony documentary Sicko in 2007, insurance companies were making elaborate preparations for a response. “The campaign [against Sicko] cost hundreds of thousands of dollars, all of which came from premiums paid by health-plan members, but industry executives felt this was a good and appropriate use of those premium dollars.”

“There’s an enormous amount of rationalization that goes on. We say, ‘We provide care for 10 million, or 20 million, or 30 million.’ And most of the time, those people are well served, and most of us think our coverage is good and adequate. But we don’t think so much about disasters.” People who aren’t catastrophically ill don’t think much about health insurance; people who are catastrophically ill are generally too distracted, often by the prospect of dying, to complain.

As wasteful and tyrannical as critics say a government-controlled health-care system would be, Potter claims it’s already that bad, and often worse, at the hands of the private insurers he used to work for. “We have had a corporate takeover of health care, which in my view is worse than a government takeover. People aren’t aware that a bureaucrat is between them and their doctor,” deciding what will be paid for, often in life-and-death situations. “Death panels indeed do exist,” he says. “They exist within corporations.” Much of the book is taken up in describing one especially tragic example. ...

Book Review: 'King' Chronicles the Reign of One of the Original 'Mad Men'/David Ogilvy and British/American Intelligence