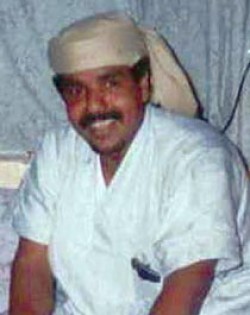 Salim Ahmed Hamdan, seen in this undated photo, was subject edto dozens of hours of interrogrations from more than 40 U.S. agents. Most of his statements have now been thrown out at his U.S. military trial. (Associated Press)

A military judge penalized U.S. prosecutors Tuesday by blocking their use of a May 2003 interrogation as they finished presenting evidence against Salim Hamdan, the first suspect to be tried on terrorism charges at Guantanamo Bay.

Judge Keith Allred, a U.S. Navy captain, said the government could not use statements made by Hamdan during his interrogation at Guantanamo as a penalty for not providing his defence team with potentially important documents until after the military trial had started.

Allred had already decided last week to ban evidence obtained from Hamdan by interrogators under “highly coercive” conditions in Afghanistan.

Hamdan underwent dozens of hours of interrogation from more than 40 U.S. agents, and documents have confirmed he was subjected to tactics including sleep deprivation and solitary confinement. Captives held at the U.S. naval base in Guantanamo Bay, Cuba, have also been tortured in some instances, according to the Red Cross, Amnesty International and the FBI.

Tuesday’s ruling means the prosecution has precious few admissions from Hamdan, who has acknowledged he worked as al-Qaeda leader Osama bin Laden’s chauffeur, to use in its case.

Allred said he would reconsider the ruling Wednesday, when the defence is scheduled to begin presenting its evidence.

But the judge said he would only allow prosecutors to submit the interrogation if they can provide “clear and convincing evidence” the statements were not obtained through coercion.

The deputy chief defence counsel for the military tribunals, Michael Berrigan, said the ruling was a welcome response to the U.S. government’s “inexcusable” delay in providing Hamdan’s defence with records that provide new details about his more than six years of confinement at Guantanamo.

“It’s gratifying to get this ruling, but it doesn’t go far enough,” Berrigan said….