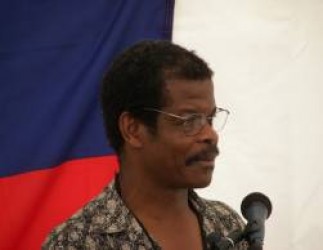 Lovinsky Pierre-Antoine, the internationally respected Haitian human rights activist, has been missing in Haiti since 12 August.

The following is a call for his safe return to his family and to his human rights work, to be sent to President Rene Preval of Haiti, as well as to the Brazilian, Canadian & US High Commissions /Embassies/Consulates in whatever countries we find ourselves. These governments play a key role in relation to the UN forces (headed by Brazil) which have taken responsibility for law and order in Haiti.

Please add your name to let those to whom the call is addressed know how urgent you believe is Lovinsky’s safe return. Thus far there are over 90 organizations, public figures and other individuals who have signed from 16 Caribbean countries as well as from other countries, including: actor/activist Danny Glover, writer George Lamming, journalist Rickey Singh; the Walter Rodney Commemorative Committee (Caribbean, USA, UK, Canada, Africa); Crossroads Women’s Centers (Guyana, Spain, UK, US); the Local Station Board, KPFK, Pacifica Radio (So. California). Names of all signatories are being sent to those to whom the letter is addressed, and will be published at a later date. Thank you.