Cheney to Raise $$$ for Maria Cino 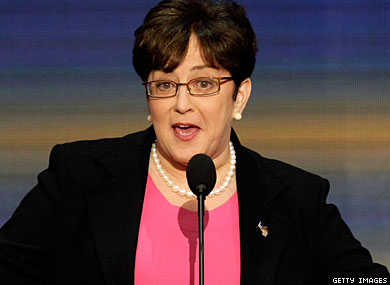 Former Vice President Dick Cheney “is putting his power as a Republican rainmaker behind Maria Cino, a former Bush administration official and Republican strategist, who is preparing to run for party chairman,” the New York Times writes. “Mr. Cheney will headline a fund-raiser for Ms. Cino on Tuesday, along with three former Bush advisers, including Ed Gillespie, the co-founder of American Crossroads. Two former Republican representatives, the husband and wife duo Susan Molinari and Bill Paxon, are also hosting, according to the invitation and news reports.”

Cino was absent from yesterday’s RNC Chair forum and hasn’t officially declared, but she has set up a 527 to collect money for a run. Here’s a recap of yesterday’s forum, which was all about money.

“Tea Party lawmakers are balking at the House Republican leadership’s plan to simultaneously repeal and replace President Obama’s healthcare law,” The Hill writes. “The resistance from conservative lawmakers is a clear indication of the challenge Republican leaders face in their uphill battle to rescind the law. The emerging friction in the GOP conference also reflects the difficult transition from campaigning in the minority party to governing in the majority. Reps. Michele Bachmann (R-Minn.) and Steve King (R-Iowa) say Republicans should repeal the law without attaching a proposal to replace it.”

“Republicans have dominated the governorships in the upper Midwest, according to the University of Minnesota’s Smart Politics Web site,” the Des Moines Register reports. “Of the region’s five states — Iowa, Minnesota, North Dakota, South Dakota, Wisconsin — Republicans have been in power 72.3 percent of the time since statehood. That covers a total of 311 governor elections in those states, according to Smart Politics.”

“Rep. Cathy McMorris Rodgers (R-Wash.) announced on Twitter and Facebook Wednesday that she had delivered her second child, a girl,” The Hill writes.