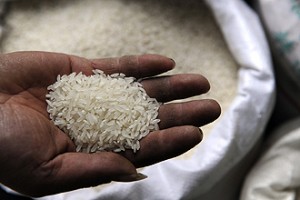 The German chemical giant Bayer, most widely known for curing headaches, seems to be causing a few lately with their insistence on pushing their controversial genetically modified rice on farmers around the world.

They have a new strain, LL62 that has been approved for commercial use, but only in the US (other strains have been approved in China). This is one area, along with debt and defense spending in which the US leads the world, presumably not because we’re eager to show the world how willing we are to cover vast tracts of farmland with these highly experimental, and biologically unstable new manmade organisms now, a near totally irreversible process, and then find out if they are safe later, but rather because the US is where most former executives of biotech companies now reside on government panels charged with approving such crops. But as we will see in a minute, this trend is starting to move into other countries. It appears that perhaps in this time of high trade deficits, we have found a new, highly profitable export: corruption.

LL62, (Liberty Linked) is a strain of rice that is professed to be resistant to the pesticide glufosinate, which is also made by Bayer. (No big surprise there). The company claims that this type of rice will achieve 10% higher yields than ordinary rice, presumably because of reduced insect damage. Unfortunately, Glufosinate residue has been shown to remain on rice and into the hands and stomachs of consumers–which means that LL62 is making it easier for the planet’s population to be exposed to the pesticide which is classified as toxic for reproduction and liable to cause birth defects. It is expected to be on the market by 2020.

This is Bayer’s second attempt at introducing Liberty Linked rice. Back in 2006, the company conducted field trials of the rice, which somehow found its way into the American food supply despite the fact that it had not been approved for human consumption. This created havoc in the rice market and reportedly cost the industry $1.2 billion. Bayer is still settling claims with individual farmers in compensation for losses they suffered. You can think of it as a rice spill, somewhat akin to what happened in the Gulf of Mexico earlier this year. But apparently it wasn’t enough to dissuade the company from pursuing this dangerous practice any more than the oil industry has been dissuaded from deep sea drilling. Alas, the allure of profit is a powerful one.

Indeed there are 3.4 billion people around the world who eat rice at least once a day. So the idea of increasing yields by ten percent seems like a noble one. Unfortunately this kind of tampering with the gene pool is risky and ill-conceived. Experts, such as Wes Jackson suggest that we would fare far better following nature’s model.

Earlier this year, the company had put a full court press on in Brazil, hoping to get approval for the rice. The company had already established a beach head for GMO crops there, thanks in large part to the fact that the CTNBio (National Technical Commission on Biosecurity) is comprised largely of individuals with close ties to the biotech industry, including: BASF, Bayer, Cargill, Dow, Dupont, Monsanto, Pioneer, Syngenta, and others.

But the effort was beaten back this time, not only because of protests from environmental and consumer groups, but also because of objections from with the agricultural sector after scientists pointed out that the new rice could interbreed with red rice, an invasive weed species which could then result in a chemical resistant variety which would be catastrophic to Brazil’s rice crop which last year reached 11.3 million tons.

Yet despite these manifold concerns, and the fact that technical analyses in the processes of licensing GMOs have lacked scientific rigor and have not followed the principles of caution as outlined in the Protocol of Cartagena regarding Biosecurity, the CTNBio has gone on record saying that, “Brazil cannot let go of transgenic technology” as it is “essential for sustainability and keeps agribusiness and small family farms competitive, and brings in numerous social and economic benefits to the country.”

Bayer was in the news earlier this month when word came out that despite the fact that another one of their pesticides, clothianidin, has been devastating to honey bees; the EPA continues to refuse to regulate it.

The stage continues to be elaborately set. These companies continue to infiltrate agencies at every level of government, either through direct recruiting or paid influence and the highly misinformed American public goes blithely along while the bureaucrats responsible for protecting their health and safety continue to rubber stamp anything the companies think they can make money on, whether they are safe or not.

I’m not sure that the answer is smaller government, as the last election tries to suggest. But I think a government that did what it was supposed to do would be a good place to start.

RP Siegel is co-author of the eco-thriller Vapor Trails.

Like airplanes, we all leave behind a vapor trail. And though we can easily see others’, we rarely see our own.