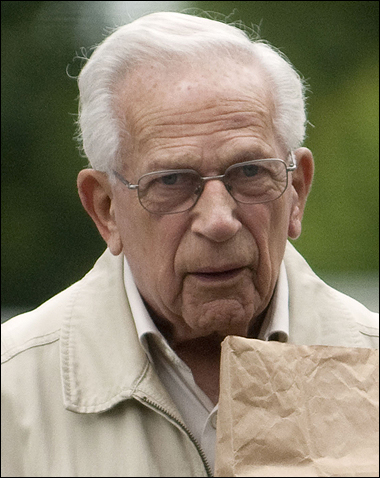 A petition signed by 150 Israeli lawyers and presented to Israeli Justice Minister Yaakov Ne'eman on Wednesday called upon the Israeli government to urge Germany to take legal action against an unpunished SS executioner living in Bavaria.

Klaas Faber was sentenced to death in Holland for a number of murders carried out when he was an SS officer, but he escaped to Germany in 1952, where he has lived ever since. The Dutch government requested that Faber be extradited several times, so that he could serve his sentence, which had been commuted in the late 1940s to life in prison.

“The protection that German law accords this convicted war criminal, enabling him to live untroubled in Germany is an affront to law and human values, and by its belittling of the enormity of the holocaust’s crimes, provides a harmful message to modern society," said David Schonberg, the Israeli lawyer that organized the petition. "We expect our government to take a more active role in the efforts to bring Nazi war criminals to justice."

The petition was submitted in support of the Simon Wiesenthal Center's efforts to enlist the Israeli government's support in the Faber case. The organization has also called upon the Israeli government to urge Germany to cancel the "Fuhrer befehl law," which grants German citizenship to non-German Nazi collaborators and protects them from extradition to their countries of origin to face prosecution.

Dr. Efraim Zuroff, The Wiesenthal Center's chief Nazi-hunter said: "Germany's failure hereto to put Faber on trial or return him to Holland are a travesty which must be corrected as quickly as possible, while justice can still be achieved."

The petition also has the support of the Center of Organizations of Holocaust survivors and Yad Vashem.

See Aftermath; Martin Bormann and the Fourth Reich on his time in Argentina. Wow.