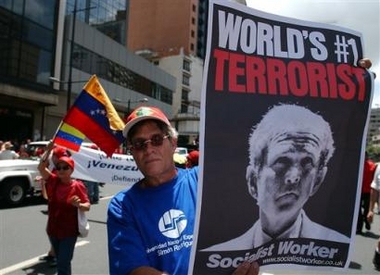 Camaguey, May 7.- Paolo Morettini, former member of the Anti-fascist Resistance movement in Italy known then as “la Resistenza”, said in Camagüey that the policy of US President George W. Bush follows Adolph Hitler’s steps to conquer the world. I witnessed many violent actions done by the fascists and saw the people’s contempt, highlighted Morettini, 82, who participated in a meting held in the eastern Cuban city of Camaguey, where former fighters from Cuba and Italy attended. … Continued: www.http://www.cadenagramonte.cubaweb.cu/english/up_todate/may_07/070507_02.asp http://www.cadenagramonte.cubaweb.cu/english/up_todate/may_07/070507_02.asp

Previous Article
U.S. Attorney in Seattle Fired for Investigating Murder of Federal Prosecutor
Next Article
9/11 reveals the criminal tendencies of a Nazi Clique