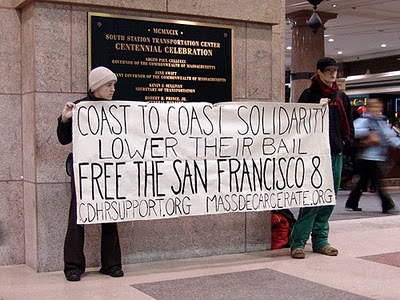 Eight former Black Panthers are currently in prison in California on charges related to the 1971 killing of a San Francisco police officer. Similar charges were thrown out back in 1975 after it was determined that the evidence used to indict the men was extracted by police torture. Two of the men have been held as political prisoners the past thirty years in New York State prisons, but the other six have been living regular lives, working and raising families. A ninth man is still being sought by the police.

These men, known collectively as the San Francisco 8 (SF 8) are being held on $3 million bail each. This bail is considered excessive and the men, their legal team and their supporters are trying to get it reduced so that those members of the SF 8 who are not currently serving time can go home during the upcoming legal proceedings. The struggle to gain these men’s freedom is gaining but will require much more public support. In a manner similar to the campaign waged in 1971-1972 to free Angela Davis and the ongoing campaign to free Mumia Abu Jamal, this campaign must become a widespread and international campaign.

As part of this growing effort, several supporters of the SF 8 spoke on a panel at the US Social Forum in Atlanta, Georgia in June 2007. Among the speakers were former US Congresswoman Cynthia McKinney and former Panther Kathleen Cleaver. Ms. Cleaver’s remarks were addressed to the mostly young audience at the forum and provided them with a historical overview of the Black Panther Party. In addition, she talked about the US government’s counterintelligence program known as COINTELPRO and how the Panthers and other leftist popular organizations organized despite the police harassment and attacks. In addition, she spoke about the differences between the 1960s/1970s and now. Most importantly, she spoke about community and the need to understand the nature of how the State has been very successful in criminalizing groups and people who organize against it. To fight this phenomenon, Cleaver emphasized the need to organize and maintain popular support beyond the radical community. When she introduced Ms. McKinney, she spoke to McKinney’s attempts to get Congress to investigate the COINTELPTO program.

In order to gather some information about the current status of the case, I recently got in touch with Claude Marks- a member of the Freedom Archives and one of the main organizers of the Free the SF 8 Defense Committee. Our exchange follows.

Ron: Hi Claude. The last time I checked in with you , most of the SF 8 had just been arrested and the authorities were working on getting the others extradited to California. Can you update the readers to where the case is now? Are the men still in jail? What is their bail?

Claude: Yes, they remain in jail and the bail is currently set at $3 million each. August 6th is when hearings on bail reduction continue – starting with Ray Boudreaux and Richard O’Neal. Arguments based on their responsible roles in their communities and to their families and countering the notion that they are flight risks, will be made. In the case of Ray Boudreaux, it is evident from the video “Legacy…” that he was fully aware of being targeted and yet, voluntarily made all of his appearances before the 2005 grand jury. Their intent is to fight the unjust charges and win!

The hope is that bail will be reduced and will be set at amounts obtainable through securing property (by California law at twice the value of the bail amount) allowing their defense to continue with them in the streets and with their families.

Ron:I know this is conjecture, but why do you think the state has set the bail so high? What are they afraid of?

Claude:I think the bail is set high as part of the state’s criminalization of them – the same reason they are brought into the public courtroom in chains and shackles.

Ron: How has the response of the public been–in San Francisco? How about the rest of the country? The world?

Claude: Support is growing tremendously – as people find out about the case they are outraged that such enormous resources are being expended to prosecute these elder of the Black community. National and now international showings of “Legacy…” along with our efforts to speak widely about the case are responsible for a much broader movement being built.

Ron: Most observers agree that this case is (as the SF 8 said in their May 19, 2007 statement) “a continuation of COINTELPRO.” Can you explain how and why this is so?

Claude: The prosecution is designed to re-criminalize resistance to a repressive and racist state. The conditions that led to demands for self-determination and an end to police & government violence against the Black community, that led to the ten-point platform of the Black Panther Party and the creation of community programs, still exist. The fact that more Black people are in prison than in higher education, that poverty levels are unrivaled, that the future for Black and Brown children is so bleak makes the politics of these men and the movements they helped lead even more urgent today. The state wants to warn people that resistance to colonialism and empire is futile or comes at a very high price.

COINTELPRO’s goals and practice are not only much the same under Homeland Security and The Patriot Act – but are unencumbered by a political climate that took outrage at violations of civil and human rights in the 1970s when a Congressional investigation declared illegal the FBI led program. Today, the government, state and federal, act with impunity as long as they use the ‘T’ word. The evidence in this case – still based on the torture and brutality of police interrogators against some of these men – is now being put forth as acceptable – torture having been re-defined and also justified in the Guantanamos and Abu Ghraibs and Atticas…and the jails of New Orleans.

Ron: Also, what do you all make of the recent release of the CIA documents (the so-called Family jewels)? I read a writer somewhere making the point that the release was timed to turn our attention away from the current doings of the government and its secret police. What’s your take on that?

Claude: The current regime is worse, and feeling emboldened by numbed public opinion. It is up to us to marshal the community outrage and build a movement that rejects the sense of government impunity – a movement that forces the dropping of these charges and a release of these 8 men – including the long overdue release of Jalil Muntaqim and Herman Bell who are parole eligible and have lived more than half their lives in prison behind COINTELPRO prosecutions.

Ron: In recent months, several environmental activists have been jailed for their supposed involvement in arson and other such actions against various corporate and research facilities. Without getting into the logic behind these actions and their effect, do you believe the government’s pursuit and prosecution of these activists is related at all to the government’s insistence on prosecuting the SF 8?

Claude: The so-called justice department wants to smash any and all dissent and has for years targeted the environmental and animal rights movements to make their resistance costly. The sentencing of Jeff ‘Free’ Luers to almost 28 years for property crimes by an Oregon Judge who stated that Free was being made an example to discourage the building of a movement was the opening parry of the ‘Green Scare.’ Yes, this is part of creating a chilling effect on dissent and a repressive atmosphere that selectively labels people terrorists to suit the goals of an extreme right-wing agenda.

Ron: These folks have received some pretty stiff penalties because the prosecution has been able to portray them as “terrorists.” What do you think this means in the long term for the SF 8 and for political activism of any sort?

Claude: The SF 8 will prevail because the legal case is weak and the political movement will expose the torture-induced statements and build sizeable community-based outrage at these prosecutions.

Ron: Back to the SF 8. When is the next bail reduction hearing? After that, what’s next?

Claude: Bail hearings resume August 6th. Other motions will address matters like the 30+ year delay when there is no new evidence, lost evidence, as well as the unnecessary chaining and shackling of these men in court.

Ron: How can the readers support the defense? Are there buttons and bumperstickers? What about speaking engagements? And personal support for the brothers in jail?

Claude: For a list of what you can do to stay informed and contribute to building a support movement in your community check out this site