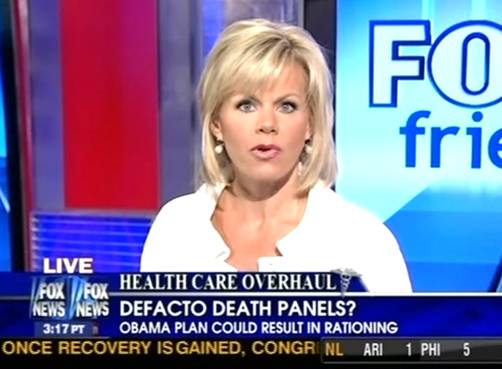 If propaganda is to be effective, it needs to be reinforced. Thus, when Fox News has a right wing talking point that needs to be communicated to its viewers, it is reinforced frequently during the course of Fox “news” and “opinion” shows.

Such was the case last Monday (Dec. 27th) which was Fox “News” “Death Panel” day. ” Last year, when voluntary end of life counseling was slated to be part of health care reform, Sarah Palin and the right wing proclaimed that this innocuous and beneficial policy was really cover for the Nazi Obama administration to set up extermination camps for senior citizens and thus the “death panel was born.” It became a flashpoint for the right wing – aided and abetted by Fox News. The “death panels” were not part of the final version of health care reform and so the matter died.

But now that Medicare policy will be allowing physician reimbursement for voluntary end of life counseling so that people can learn about “living wills” and medical durable power of attorney and thus avoid the horror of a Terri Schiavo thing, Fox “News” is providing mouth to mouth resuscitation for the scary death panels which will make sure that grannie gets offed by callous government workers. Ain’t no party like a “death panel” propaganda party and Fox “News” is bringing it. As Joseph Goebbels said, “The most brilliant propagandist technique will yield no success unless one fundamental principle is borne in mind constantly – it must confine itself to a few points and repeat them over and over.” For Fox “News” the “fundamental principle” is that death panels are out to get ya!

Let’s begin with the Fox “opinion” shows. They started right out of the gate with two “death panel” segments on “Fox & Friends” during which Clayton Morris asked partisan leading questions to his right wing guest and Peter Johnson Jr. said that end of life counseling was “disturbing” and a bunch of other negative stuff including a smear on the Obama nominee, Dr. Donald Berwick, to head Medicare and Medicaid. Later in the day, Cavuto fill in Brian Sullivan gave incoming Republican Congressperson and Tea Party fave Joe Walsh (IL) almost five undisputed minutes in which to advocate for the repeal of health care reform based on the “outrageous” “death panels” which will “lead to rationing.” There was a modicum of “fair and balanced” during a “Factor” discussion as the guests were balanced. But as noted by Ellen, the host, Eric Bolling was very partisan in his regurgitation of the right wing talking point that end of life counseling was an incentive to euthanize old folks. Kirsten Powers, on the Hannity show, held her own against the slings and arrows of outrageous right wing “death panel” agitprop.

So let’s take a look at the Fox “News” show coverage of the issue cuz we know it was “fair & balanced.” Just kidding! During the Fox “News” show, “Special Report,” Shannon Bream worked in some not so subtle agitprop with her question, “All right, I want to talk about the other healthcare issue that bubbled up this weekend over the last couple of days, the piece in the New York Times that talked about the so-called end-of-life discussions and some called them death panels coming back. They didn’t pass as part of the law but now they’re coming out via regulation issued by the head of CMS, Dr. Donald Berwick. Someone said rationing of care is matter of time…” (Key words – death panels, Berwick, and rationing.) Charles Krauthammer said that “it clearly is for people who think about ultimately rationing in the end a first step on the road because it would suggest that people ought to consider doing away with measures…” Right wing “Weekly Standard” (Murdoch publication) writer Stephen Hayes commented,c “Whether you want to call them death panels or not, there are reasons that people should be concerned about who is making those decisions and why those decisions are being made.” On “America’s Newsroom.” (Supposedly real “news”) the every smarmy Greg Jarrett, with his characteristic lip curl, promoted more “death panel” propaganda with Fox fearmonger and misinformer Dr. Marc Siegel who even dismissed the concept of “terminal illness.”