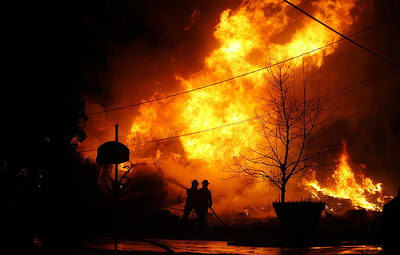 1) “Top aviation law firm digs into the case,” WIVB-TV News4News, Buffalo, NY – Daniel Rose, a former Navy pilot in Iraq and a partner at Kreindler and Kreindler, is going to “investigate” the disaster. Mr. Rose is limiting his probe to “pilot error,” of course. The crash only looks like sabotage and assassination of activists, witnesses and co-conspirators that the Bush administration wanted out of the way. But who in that Republican circle, with its fine, immutable “conservative principles,” would stoop to political assassination?

2) “Kreindler & Kreindler Law Firm is a Cynical CIA Psyop Tool” – I originally posted this data in 2006. My motto: “The cover-up proves the crime.” K&K is on intimate terms with the CIA, and has been central to covering up a score of covert ops/mass murders. K&K was also, as documented, instrumental in selling the American public on the Iraq War with a psychological operation falsely linking Saddam Hussein to 9/11 and the A-Bomb. Fox News: ” … Kreindler & Kreindler, a Park Ave. law firm that has been working overtime to establish a money trail leading from Saddam Inc.’s amassed loot to al-Qaeda’s coffers. … “ Yes, it’s that kind of law firm … Jim Kreindler on 9/11: “Immediately I suspected a terrorist attack and I found myself thinking about another terrorist event that dominated the attention of our law firm since 1988 – the bombing of Pan Am 103 by operatives of the Libyan government. … ” Sure-sure …
•••
1) Top aviation law firm digs into the case
23 Mar 2009
Posted by Emma Orn

BUFFALO, N.Y. (WIVB) – We’re still waiting for conclusive answers about what caused the horrific crash of Flight 3407 in Clarence Center. One of the nation’s top aviation law firms is digging into the case.

Daniel Rose, a former Navy pilot [carrier-based attack pilot on board the U.S.S. Independence, where he participated in Desert Shield] and a partner with Kreindler and Kreindler recently sat down with Investigative Reporter Luke Moretti. He said the firm’s own investigation is focusing on the flight crew’s experience and training.

“Certainly in a major airline you would never see the pairing of experience that we see here. You would have easily, either one, the pilot or co-pilot having thousands of hours in that particular plane before they were introduced to a co-pilot or a pilot that had much lesser time,” Aviation Attorney Daniel Rose said.

One key piece of evidence is the cockpit voice recorder. Investigative reporter Luke Moretti will have more on that coming up Monday night on News 4 at 11.

One of Fawcett’s clients is Kreindler & Kreindler, a Park Ave. law firm that has been working overtime to establish a money trail leading from Saddam Inc.’s amassed loot to al-Qaeda’s coffers. … “We think Saddam’s laundered money was used in part to provide financial support to al-Qaeda, and we’re looking at billions of dollars hidden in financial institutions and companies,” says attorney James Kreindler.
——————
Mark Labaton, KK

… Kreindler confidently countered the prevailing wisdom about the crash of TWA 800…. “TWA 800 exploded at 13,700 feet in calm weather. It would have taken a huge bomb to bring that plane down, and the larger the bomb, the more difficult it is to smuggle onto a plane. So we felt from the very beginning that we were looking at mechanical or structural failure.”

In Oil-for-Food, “Every contract tells a story,” says John Fawcett, a financial investigator with the New York law firm of Kreindler & Kreindler LLP, which has sued the financial sponsors of Sept. 11 on behalf of the victims and their families. In an interview, Mr. Fawcett and his colleague, Christine Negroni, run down the lists of Oil-for-Food authorized oil buyers and
relief suppliers, pointing out likely terrorist connections. One authorized oil buyer, they note, was a remnant of the defunct global criminal bank, BCCI.
Another was close to the Taliban while Osama bin Laden was on the rise in Afghanistan; a third was linked to a bank in the Bahamas involved in al Qaeda’s financial network; a fourth had a close connection to one of
Saddam’s would-be nuclear-bomb makers.
——————
Mark Labaton

Mark Labaton, is a partner at the firm Kreindler & Kreindler, LLP, with offices in New York and LA. The firm handles cases including securities and consumer class actions, and FCA whistleblower, antitrust, and
consumer cases.

His resume includes 7 years as an Assistant US Attorney for the Central District of California, where he prosecuted white-collar fraud cases, including whistleblower actions…
————
K & K AND BCCI

… As in the game Monopoly, sometimes practical alliances can be formed for tactical purposes against a common enemy. A detailed argument relating to the connections between Iraq and Al Qaeda can be found online in the trillion dollar complaint against Iraq filed by the law firm Kreindler & Kreindler in connection with 9/11….
—–
http://www.overlawyered.com/2004/
09/update_blame_it_on_riyadh.html

And in the New York Observer, Nina Burleigh in February profiled attorney Brian Alexander of the prominent plaintiff’s air-crash firm of Kreindler &
Kreindler, who had “already filed a suit — on behalf of the families of more than 1,000 9/11 families against a list of foreign entities hundreds of pages
long.” (“Air Disasters, Legal Fees And Justice for the Victims”, New York Observer, Feb. 23).

This may be uncharted waters, but I was thrown in a pool on Sept. 11, 2001, and had to learn to swim,” says 9/11 widow Monica Gabrielle, of West Haven, Conn. “No one has been fired. No one has been demoted. The same people who are guarding us today on an elevated security alert are the same people who were working that day.” She describes her late husband, Richard
Gabrielle, an insurance broker who lay trapped underneath rubble as the South Tower collapsed: “He was a gentle man, and he was alive, trying to get out of that building that day. The dead. The dying. The smoke. The terror. No one should have suffered like that. I want accountability. I need answers.”

Gabrielle is represented by Kreindler & Kreindler, the Manhattan firm that won $2 million in 1995 for 13 American Airlines passengers who had experienced 28 seconds of severe turbulence. Gabrielle is one of many
plaintiffs represented by the firm who have joined others in filing suit against the airlines and security firms involved in 9/11. Also named are Osama bin Laden, al Qaeda, certain governments, and parties accused of masterminding the attacks.

As Gabrielle’s attorney, Brian Alexander, sees it, the 9/11 Victim Compensation Fund is the byproduct of powerful airline lobbying. “The legislation[that created the fund] was designed to protect the airlines first and foremost—and it was airline lobbyists who pushed it,” Alexander says. “The Victim Compensation Fund for the families was an afterthought.” ??Skeptical of the Mariani suit’s chances, Alexander says, “At the end of the day there are legal defenses that the government can take, they get to be stupid, they can be as negligent as all get-out, and they will still win, especially when you’re talking about intelligence.”

But Mariani’s goal is not victory in court, but a closer pass at the truth.
————-
Kreiger & Kreiger Does ‘Em All

Founded in 1950, Kreindler & Kreindler LLP (www.kreindler.com) is nationally recognized as the first and most prominent aviation law firm in the nation. With offices in New York and Los Angeles, the firm has been the leading plaintiff legal counsel on hundreds of aviation cases, including major ones such as the September 11 terrorist attacks, Pan AmLockerbie Flight 103, Korean Airlines Flight 007, TWA Flight 800 and American Airlines Flight 587, and many cases of small private and commercial crashes. The
leading legal textbook in the aviation field, “Aviation Accident Law,” was authored by members of the firm.
—————-
James P. Kreindler & Kings County (Brooklyn) District Attorneys’ Office

American Mafia is not only a body count of the corrupt. Reppetto rewards the reader with surprising facts concerning the FBI’s origin, J Edgar Hoover’s
history of slouching away from organized crime, the infiltration of the movie industry by the mob, the criminal corruption in the political machine that
produced President Truman and, for contrast, the striking figure of Henry Morgenthau, Jr, using among other things, Treasury to fight crime. Reppetto offers an example of political arithmetic. If Costello controlled New York County (+1), and Adonis controlled Kings County (+1), what did that add up to in controlling Bronx boss Ed Flynn who had to answer to Governor Lehman and President Roosevelt should New York County and Kings County fall out of their baskets in configuring the Democrat control of New York State? If your answer is 2, leave the room and while out there reflect on the fact that, according to Reppetto, when Flynn was Bronx County sheriff Dutch Schultz was issued a deputy sheriff’s badge….

As racketeering seeped through New York’s labor unions, the clothing, trucking, and other industries, Tammany leader Jimmy Hines, by controlling judges and prosecutors like prostitutes, protects Dutch Schultz and Luciano. Joe Adonis in Brooklyn had similar power over the Kings County District Attorney.