Much ink has been spilled about the Koch brothers. But there are plenty of other wealthy right-wingers promoting dangerous policies.

A non-insane observer of American politics might wonder why our elite policy makers are considering curbing our budget deficit by cutting Social Security and Medicare payments all while further lowering tax rates for high-income earners.

The answer is that most of our political class and establishment media have bought into the meme that rich people are so super-special that if we hurt their feelings by making them pay the same amount in taxes that they paid in the 1990s, they will get so depressed they will lose the will to work and no one in the country will ever have jobs again.

While this idea may seem insane to all sane people, it’s actually one of many ideas promoted over the past several decades by wealthy right-wingers who have plunged significant sums of money into conservative think tanks, political candidates and advertising campaigns. You see, for some reason rich Americans aren’t content to have five yachts and a butler named Willivers -- rather, they seem obsessed with having the entire country leave red, white and blue smooch marks all over their rear ends.

And just who are these multimillionaire propagandists, you ask? Well, I’m sure you know all about the Koch brothers and Rupert Murdoch, since they’ve all been relatively high-profile lately. But there are plenty more right-wing sugar daddies out there. So without further ado, let’s get started! 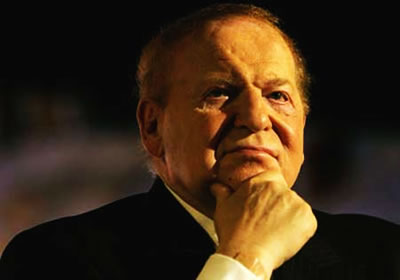 Like most neoconservatives, Adelson’s goal in life is to make sure the United States and Israel remain in a state of perpetual warfare against Arab countries until most of the world is destroyed. Adelson, who made his fortune as a Las Vegas casino mogul, made headlines in 2007 when he funded Freedom’s Watch, a neoconservative advocacy group that supported wars wherever and whenever it could find them.

The group’s first campaign was a $15 million ad blitz urging Americans to support the Iraq troop surge. One of the group’s most notorious ads featured an Iraq war vet who lost both his legs during the war imploring Congress to keep funding the war indefinitely because “if we pull out now everything I’ve given and sacrificed will mean nothing.” The ad also shamelessly conflated the Iraq war with the September 11 terrorist attacks by showing pictures of the World Trade Center burning as the vet firmly reminded Americans that “they attacked us.”

From there, the group held a conference hyping up the dangers of Iran and radical Islam in general. Freedom’s Watch disbanded in late 2008 after a sizable chunk of Adelson’s spare cash went up in smoke -- quite possibly the only good outcome from the global financial crisis.

Although Adelson’s impact on U.S. policy is relatively small, he is much more of a factor in Israel where he invested a reported $180 million to launch the free Israel Hayom tabloid in 2007. The Israeli media apparently refer to the paper as “Bibi-ton” because it serves as a propaganda rage for Netanyahu’s hard-line Likud government. The paper, which now has the largest circulation of any daily newspaper in Israel, mercilessly attacked the government of former Israeli Prime Minister Ehud Olmert, particularly his handling of the 2006 mini-war with Lebanon (sample headline, per the New Yorker: “The Ass-Covering of the Government”). Adelson was also upset that Olmert had the audacity to support a two-state solution where Palestinians are actually given some level of autonomy over their lives.

Scaife got his start in politics by giving Richard Nixon’s campaign $1 million in 1972 and he hasn’t looked back since. As an heir to the Mellon fortune, Scaife didn’t exactly have to pick himself up by his bootstraps on his way to the top. And instead of doing something useful with his life, Scaife has blown hundreds of millions of dollars keeping wastoids like Jonah Goldberg employed by funding conservative think tanks such as the Heritage Foundation, newspapers such as the Pittsburgh Tribune-Review and right-wing opinion rags such as the American Spectator.

Scaife really hit his stride in the 1990s when he became obsessed with forcing President Bill Clinton and his penis from office. He kicked things off in 1993 by funding the so-called “Arkansas Project” that sent Spectator hacks down to Little Rock to dig up embarrassing dirt on the Clintons. Although that failed to produce the goods, Scaife decided to simultaneously fund Paula Jones’ unsuccessful sexual harassment lawsuit against Clinton, thus setting the stage for later sex scandals that would result in the president getting impeached by the Republican House.

Scaife also got another “gift” when the suicide of Deputy White House Counsel Vince Foster sparked a litany of crazed conspiracies asserting that the Clintons had actually murdered Foster themselves.

“The death of Vincent Foster: I think that's the Rosetta Stone to the whole Clinton Administration,” Scaife told the New York Times in 1995. “There are just too many questions that have no answers. ”

In order to unlock this "Rosetta Stone," Scaife funded “journalists” who were willing to keep the Foster-was-murdered conspiracy alive. As New York Times reporter Tim Weiner noted at the time, Scaife’s Tribune-Review was “the only daily newspaper in the nation trying to prove that Mr. Foster might have been murdered.”

Sam and Charles Wyly gained notoriety during the 2000 Republican presidential primary by bankrolling the most comically Orwellian front group ever assembled. Dubbed “Republicans for Clean Air” the group spent more than $2 million for ads that attacked John McCain’s environmental record while praising George W. Bush’s green credentials. The Wylys similarly went to bat for their boy Bush by donating $10,000 a piece to the infamously dishonest Swift Boat Veterans for Truth campaign that attacked John Kerry’s war record in Vietnam. The Wylys also donated more than $1 million to the National Committee Committee from 2000 through 2004, although they significantly curbed those donations once the Securities and Exchange Commission started investigating them for tax fraud.

Other than funding conservative campaigns, the Wylys’ favorite hobby seems to be getting in trouble for alleged tax evasion. The Wylys, who started making money in the software business and then branched out to clothing stores, restaurants and energy companies, first got the attention of the SEC in 2004 when they refused to provide Bank of America with details on their offshore assets. Oops!

From there, it was one unfortunate event after another for the Wylys. In 2005 the brothers copped to “inadvertently” hiding company profits in offshore trusts. In 2006, the Senate’s Permanent Subcommittee on Investigations issued a report detailing a series of trusts the Wylys set up on the Isle of Man that were used to shelter $720 million worth of profits from taxation. And this past summer the SEC finally brought the hammer down on the Wylys, accusing them of reaping more than $30 million from an insider trading scheme related to the sale of their Sterling Software company. The SEC is seeking millions of dollars in fines from the brothers, which would presumably leave them with less cash to use on political smear campaigns. And what a sad, sad tragedy that would be.

This super-wealthy technodork, who made his money cofounding the PayPal online payment service and being one of Facebook’s earliest investors, is using his cash to influence hearts and minds, albeit in a significantly different way from the previous right-wing sugar daddies we’ve examined. For instead of funding right-wing political campaigns, advertising blitzes and think tanks, Thiel is instead trying to influence his fellow libertarians to flee society, not change it.

Thiel officially lost faith in American society after the 2008 presidential election and he confessed on the Cato Institute’s Web site that he thought democracy and freedom were no longer compatible. The big reason for this, Thiel said, was that over the past century too many people went on welfare and women got the right to vote. Since welfare recipients and women are “two constituencies that are notoriously tough for libertarians,” Thiel reasoned, then “the notion of ‘capitalist democracy’” has become “an oxymoron. ”

To rectify this, Thiel sunk more than $500,000 into the hilariously bone-headed “Seasteading” project being headed up by Patri Friedman, the grandson of famous conservative economist Milton Friedman. With money from Thiel and other like-minded rich libertarians, the seasteading project aims to build large, floating, concrete platforms in international waters where libertarians can live without the greedy hands of Uncle Sam taking their hard-earned cash.

They also plan to make money for themselves by using these platforms as intranational havens for drugs and prostitution, since no legal authority would be able to arrest them out in the open waters. And presumably, women living on the platforms won’t have any say in how the seasteads are run, lest they transform these aquatic libertarian paradises into scummy socialist hellholes. Thiel is also interested in funding transhumanist life-extension projects, as he has given the Methuselah Foundation excess of $3.5 million to ensure that he and his buddies can haunt the Earth with their presence for at least the next few hundred years.

When you think about it, Thiel’s devotion to dopey libertarian escapism, while elitist and horribly sexist, actually makes him the most palatable of all the right-wing sugar daddies we’ve examined. Unlike Scaife, Adelson and the Wylys, Thiel doesn’t want to influence how we think about the world. Rather, he wants to flee the wretched mediocrity of his fellow fleshbags and escape to a no-girls-allowed cyber-treehouse out in the middle of the ocean. To which I say, “You go, Galt!” The only tragedy is that if Thiel succeeds he likely won’t bring any of his brethren with him to the seastead platforms. Because what America needs now more than ever is for a bunch of its self-appointed Atlases to go shrug themselves.