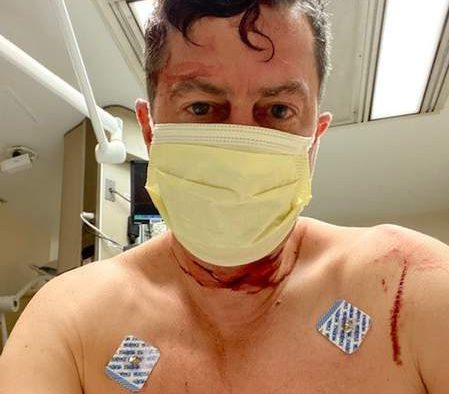 W. Sam Patten’s bio in like a picaresque novel begun by Dickens, and completed collaboratively by Norman Mailer, Henry Miller, Dostoevsky and John LaCarre.
He is the grandson of Susan Mary Alsop, wife of Joseph Alsop, a well-known homosexual CIA propagandist. Alsop was a driven Cold Warrior, a confidante to presidents, congressmen and career diplomats. His marriage to Mary served as a cover for his homosexuality.
So Sam’s father, Bill Patten, Jr., was the culmination of an affair that Ms. Alsop had with British diplomat Duff Cooper — an arrogant, boozing, self-centered satyr with a long list of sexual conquests. Sam himself drinks heavily, and has been known to comport with prostitutes.
He was raised by his grandmother. As a child, he was surrounded by Georgetown luminaries — Katharine Graham, Frank Wisner, Averell Harriman, a host of famous names. He met Henry Kissinger. The CIA was heavily represented in this cavalcade.
His adult life is no less interesting. His wife, true to form, once worked for the CIA. He is a world traveler, a career election campaign adviser and lobbyist with close ties to Paul Manafort and the the pardoned felons of Cambridge Analytica. He worked with Steve Bannon and Erik Prince. Patten was a ranking defendant in Robert Mueller’s investigation of Manafort and Sam’s business partner, Konstantin Kilimnik (a fugitive whose capture is worth $250,000 to the FBI). Patten pleaded guilty to illegal lobbying for foreign interests. He cooperated fully with Muller’s investigation. All of the other Trump campaign felons refused to talk, perjured themselves, preferred notoriety and risked a prison term to simply telling the truth.
Then, shortly after the 2020 election, Patten was assaulted in DC by a knife wielding berserker. He was stabbed eight times.
The timing was curious. Kilimnik had been identified as a Russian spy and electoral saboteur. Though it had yet to be reported, he had dropped internal Trump campaign polling data in the hands of Russian intelligence. The attack occurred a couple of weeks after the 2020 presidential election. If it had come before and Patten was found dead, it might very well have made headlines and blown back on Trump.
Patten is often cagey when it comes to sharing information. Was he harboring information about Cambridge Analytica and his former Russian business partner? Reports of the assault were scattered, and though highly newsworthy, most major news outlets steered clear. Most kept it brief:

Newsbreak | 11-23-2020
“W. Samuel Patten, a key witness in special counsel Robert Mueller’s Russia-collusion probe, was assaulted by a knife-wielding attacker in Washington last week. Patten was stabbed twice in the head and six times in the back during the attack at 5 p.m. Thursday on the 1400 block of Florida Avenue NW.”
Washington Times: “Nov 23, 2020 — The Washington Metropolitan Police Department identified the suspect as Antoine Royster, 42, of Washington. …”
Antoine Royster was a convict let out of prison after a too brief prison term. For no apparent reason, he chose Patten, of all Washington DC residents, to butcher with a knife on a public street. Patten attributes his survival jokingly to a layer of subcutaneous fat, but he struggled, and Royster fled because witnesses arrived. If not for them, Patten might have been left to bleed out on the sidewalk.
Since the press was largely silent about the attempted murder, no one asked the obvious questions. Was it a an attempted hit? Patten is privy to secrets — most notably relating to election meddling by Robert Mercer’s covert operators and the Russians  — that could get him killed.
There are many obscure sinkholes in his biography that may never see the light, but are provocative and may well explain Patten’s scars:

Who is Sam Patten?

August 31, 2018
By Curt Devine/CNN-WRAL.COM
(CNN) — Political operative W. Samuel Patten, who was charged Friday with acting as an unregistered foreign agent for Ukrainians, has an extensive résumé that includes ties to other individuals caught up in special counsel Robert Mueller’s investigation and work with the controversial political consulting firm Cambridge Analytica.
Patten, 47, reached a plea deal with the Justice Department. He faces up to five years in prison and a $250,000 fine for the felony charge and has agreed to cooperate with prosecutors.
Patten’s personal website describes him as a “strategic advisor” who has worked in politics on four continents. He has taken on numerous roles for campaigns and organizations over the last two decades, including as Eurasia director for the pro-democracy organization Freedom House in Washington, as well as a consultant for politicians in Ukraine, Georgia, Iraq and Nigeria, among other countries.
In the early to mid-2000s, Patten worked in Moscow for another pro-democracy organization, the International Republican Institute, along with Konstantin Kilimnik, who has been charged by Mueller’s office with obstruction of justice and conspiracy to obstruct justice.
Business records list Patten as an executive of the company Begemot Ventures International with Kilimnik in 2015, which is touted as “a strategic and political advisory firm that helps its clients win elections, strengthen political parties … and achieve better results” on its website, which does not list any clients.
Prosecutors have said in separate court filings that Kilimnik has ties to Russian intelligence. Kilimnik is also a close business associate of President Donald Trump’s former campaign chairman Paul Manafort, who also did political work in Ukraine and has been found guilty on eight counts of financial crimes.
Patten performed various services for Cambridge Analytica, the company that became embroiled in controversy earlier this year due to its sweeping collection of Facebook data, as well as its parent company SCL Group.
Brittany Kaiser, a former director at Cambridge Analytica, described Patten in testimony before the British Parliament as a “trusted senior consultant” to SCL Group. She said Patten did work for SCL in Nigeria and that he helped to organize an event on Capitol Hill in Washington.
Patten confirmed his involvement with Cambridge Analytica to The Daily Beast, saying he assisted the firm’s US projects in 2014 and also “several overseas campaigns.” He declined to provide further detail, citing a nondisclosure agreement.
On Facebook, Patten posted a photograph of himself in 2014 with Oregon congressional candidate Art Robinson, whose campaign paid Cambridge Analytica about $20,000 that year.
Separately, the Trump campaign hired Cambridge Analytica for its data services in 2016.
Friday’s charging documents state that Patten worked with an unnamed Russian to place op-ed articles in US media in 2017 and was paid more than $1 million for the Ukrainian opposition bloc work, including meeting with members of the executive branch, Senate Foreign Relations Committee members and other members of Congress.
The Ukrainian opposition bloc is a largely pro-Russian party. The group emerged in 2014 in opposition to the wave of Ukrainian protests and demonstrations that ousted former Ukrainian President Viktor Yanukovych.
In 2014, Patten wrote an op-ed for The Hill in the lead-up to the Ukrainian elections in which he called for “political balance” that did not ostracize the opposition bloc.
“Groups such as the Opposition Bloc, which consists of figures from eastern Ukraine, must perform well in the elections,” he wrote.
An archived page on Patten’s personal website also notes that he helped steer the re-election campaign of Vitali Klitschko, a Ukrainian politician who was elected mayor of Kiev in 2014.
Court documents show that Patten has also crossed paths with Rinat Akhmetshin, the Russian-American lobbyist who has promoted Kremlin-aligned interests in Washington and who was present at the June 2016 Trump Tower meeting with senior Trump campaign officials.
In a deposition for a civil lawsuit, Akhmetshin said he was retained to provide opposition research on a former Russian politician, Ashot Egiazaryan, and that he “approached” Patten about the matter.
Akhmetshin said Patten did him a favor in 2011 by letting him “know that Mr. Egiazaryan is coming to Washington. That’s the nature of courtesy.”
Patten has no prior criminal history, his plea agreement said. His defense attorney declined to comment following the hearing.
In a 2017 interview with an academic researching SCL Group, Patten reflected on his experience in international political consulting and said, “I’ve worked in Ukraine, Iraq. I’ve worked in deeply corrupt countries, and our (US) system isn’t very different.”
Despite his lobbying work for the pro-Russian opposition bloc, Patten’s website states that he previously worked with Russian opposition leader and Putin critic Boris Nemtsov, who was murdered in 2015 two days before a planned demonstration.
Patten has also openly critiqued Russia’s human rights record.
In 2010, as a senior program officer at Freedom House, Patten testified before Congress and denounced Russian government officials and called for the US to increase its support of Russians pushing for government reform.
“When confronted with evidence of their criminality, their misrule and their abuse of human rights, Russian Government officials generally do one of three things: They will obfuscate, they will offer stale comparisons, or they will ratchet up the level of vitriol in their rhetoric,” Patten told members of the Tom Lantos Human Rights Commission at the time.
Previous Article
FILLING IN THE GAPS IN THE MUELLER REPORT, PART TEN: The Confession of Cambridge Analytica’s W. Sam Patten, Konstantin Kilimnik’s Business Partner and Mueller’s Only Cooperative Russiagate Felon
Next Article
‘Dudes, I Offed a Fed’: Four Alleged Boogaloo Boys Charged with Obstructing Federal Probe into Bay Area Police killings Case