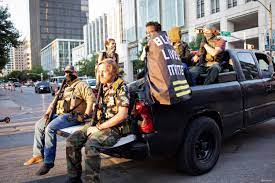 Donald Trump suggested that a left-leaning team of anarchists was organising the messy unrest around George Floyd’s killing.

Meanwhile, local officials kept it politically neutral, blaming “outside agitators” for looting and vandalising their cities.

Four weeks after Floyd was killed, we’re only just starting to get a clear picture of the extent to which these claims were true.

But media reports, arrest records and expert analysis suggest an ensemble of lone anarchists, radical opportunists and extremist groups are also using the moment to spread their messages or incite violence.

Experts say there have been at least 130 “extremist incursions” at the protests, a term that encapsulates everything from injuring protesters to just quietly attending to be visible.

Amy Iandiorio, an investigative researcher with the Centre on Extremism, says it’s going to take a while to sort out which groups were responsible for what — especially because the protests are ongoing, shifting towards new targets like tearing down statues.

The narrative may change as investigations continue and more information comes to light.

For now, those arrested for more serious crimes fit into five prevailing categories:

So far it looks like many, possibly most, of those arrested for the visible crimes associated with riots — such as property damage, arson or vandalism — are not organized under a prevailing ideology other than anti-police anger.

A smaller group has admitted to using the moment for personal gain through acts like looting.

“There are some who are just ready to see the corruption of the system,” Ms Iandiorio said.

“Across the ideological spectrum, individuals will never miss an opportunity to take advantage of a moment.

“But I think it’s not fair to call these protests ‘extremist events’ because the evidence is just not there. The vast majority of this is peaceful protest.”

White nationalists are responding to widespread calls for equality with calls for inequality.

Devin Burghart, who monitors far-right groups with the Institute for Research and Education on Human Rights, says they tend to be more organised than the other extremists, with some groups recruiting global membership.

“They may have hundreds or thousands of members with leaders who kind of run them,” he said.

So far, we haven’t seen large groups of white nationalists out on the streets in response to the protests.

A handful of apparent lone actors have been arrested for trying to injure protesters, including one admitted leader of the Ku Klux Klan who drove into a crowd in Richmond Virginia.

There’s also some overlap between white nationalists and members of anti-government militias or the Boogaloo movement (see below), both of which have had a presence at the protests.

Still, Mr Burghart said that the main white nationalist groups are “exponentially larger online and exponentially more racist and violent online” and they may organise a visible response later on.

Some scattered vigilante groups show up to protests in paramilitary gear and carrying guns.

Generally united by anti-government or hard-libertarian views, they say their goal is to protect peaceful protests from devolving into riots.

According to one estimate by the Washington Post’s factchecker data unit,police have made 14,000 arrests in 49 cities since the protests began in late May, and the vast majority of them involved locals charged with low-level offenses such as violating curfew or blocking a roadway.

But US media point to several cases where members of these groups discharged firearms, causing chaos or injuring protesters.

The groups are most common in small towns and rural areas, where looting and rioting is not happening at the scale seen in urban centres.

They tend to be white, male and right-leaning, seeing Mr Trump as an ally to the anti-government cause.

Experts say there’s a large overlap in membership between these groups and those who protested the coronavirus lockdown in late April.

“You have an unaccountable, unelected, untrained, private paramilitary organisation that has established connections to law enforcement,” he said.

“I think that’s really damaging to the fabric of democracy.”

This is a trickier one to categorise because it can fit both circles above, and it’s relatively new to the scene.

Megan Squire, an Elon University professor who tracks the Boogaloo movement, says it feels like the latest iteration of the anti-government groups that we’ve seen for years.

“It’s almost not as much of an ideology as it is a meme or a brand,” she said.

“It’s being picked up by people who identify with it in some way but some of them probably don’t even entirely know what it means.

“They’re very pro-gun and they get annoyed by police or government shows of authority, but there’s not much else they agree on politically. Some are libertarian, but others avoid talking about politics at all.”