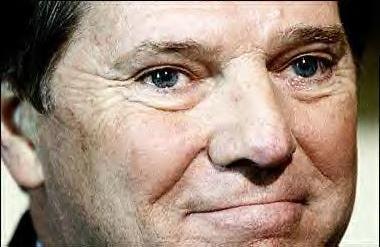 The verdict was the latest chapter in a long legal battle that forced Mr. DeLay to step down. The trial also opened a window on the world of campaign financing in Washington, as jurors heard testimony about large contributions flowing to Mr. DeLay from corporations seeking to influence him and junkets to posh resorts where the congressman would rub shoulders with lobbyists in return for donations.

Mr. DeLay faces up to life in prison on the money laundering charge.

During the three-week trial, the prosecution presented more than 30 witnesses in an effort to prove Mr. DeLay conspired with two associates in 2002 to circumvent a state law against corporate contributions to political campaigns. Since 1903, Texas law has prohibited corporations from giving to candidates directly or indirectly.

Mr. Delay was initially charged with breaking campaign finance law, but prosecutors later switched strategies because it was impossible under the law at the time to accuse someone of conspiring to break campaign finance rules.

Instead, prosecutors used a novel legal theory never before tried in Texas: they argued Mr. DeLay and two of political operatives — John Colyandro and Jim Ellis — had violated the criminal money-laundering law. They were charged with conspiring to funnel $190,000 in corporate donations to state candidates through the Republican National Committee.

The main facts of the case were never in dispute. In mid-September 2002, as the election heated up, Mr. DeLay’s state political action committee, Texans for a Republican Majority, gave a check for $190,000 to the Republican National Committee. The money had been donated earlier in the year by various corporate lobbyists seeking to influence Mr. DeLay, several witnesses said.

On Sept. 13, the check was delivered to the R.N.C. by Mr. Ellis, who was Mr. Delay’s top political operative in Washington and headed his Federal political action committee. At the same meeting, Mr. Ellis also gave the Republican director of political operations, Terry Nelson, a list of state candidates and an amount to be sent to each. Mr. Nelson testified that Mr. Ellis had told him the request had come from Mr. DeLay.

In early October, donations were sent from a separate account to seven G.O.P. candidates in Texas. Six of them won. The Republican seized control of the legislature for the first time in modern history and promptly pushed through a controversial redistricting plan — orchestrated by Mr. DeLay — that sent more Texas Republicans to Congress in 2004 and helped him consolidate his power.

Jurors had to wrestle with the questions of what Mr. DeLay knew about the transaction, when did he find out and did he participate in the decision to swap the money. Another central issue facing the panel was whether the corporate contributions could be considered illicit. To be guilty of money-laundering, the prosecution had to show the money had been obtained through an illegal activity before it was laundered.

Prosecutors presented a mountain of circumstantial evidence — emails, telephone records, calendars, brochures and other documents — trying to persuade jurors that Mr. DeLay played a leading role in the plan and intended to break the Texas election law from the moment his political operatives solicited the donations.

But the lead defense attorney, Dick DeGuerin, maintained the money swap was legal and a common practice. He also presented evidence to distance Mr. DeLay from the actions of his political operatives, arguing that while Mr. Ellis told Mr. DeLay about the transaction, Mr. DeLay never gave his approval.

Judge Pat Priest has wide discretion in sentencing the former majority leader, who was known as “The Hammer” for his no-holds-barred style during 20 years in the House of Representatives. Mr. Delay could be sentenced from 2 years to 20 years in prison for the conspiracy count, and from 5 years to 99 years, or life in prison, for the money-laundering count.