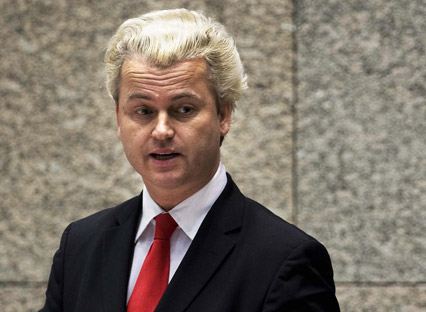 The anti-Muslim politician Geert Wilders, whose Freedom party (PVV) won 24 seats and third place in the Dutch national election last month, says he is forming international alliances to launch branches of his Islamophobic party across the Western world. Almost 1.5m Dutch people voted for the PVV in June. Now Wilders, who is under constant 24-hour protection because of his incendiary public statements on Islam, has said he will start groups in the US, Canada, Britain, France and Germany later this year. Wilders left the right-wing Liberal party (VVD), which came first in the recent general election with 31 seats, in 2004 in protest at their support for Turkey’s accession to the EU. He has since made his fierce opposition to Islam the central – and most frequently articulated – tenet of his new party. Among other goals, he hopes his mooted international alliance will lead to a block on immigration from Islamic nations to the West and a ban on Sharia law. Speaking to reporters at the Dutch parliament yesterday, Wilders said: “The message, ‘stop Islam, defend freedom’, is a message that’s not only important for the Netherlands but for the whole free Western world.” He added: “The fight for freedom and [against] Islamisation as I see it is a worldwide phenomenon and problem to be solved.” Wilders equates Islam with fascism and, in speeches and a notorious short film, Fitna, expounds on the threat of violence he claims is inherent in the Koran. His rhetoric has led to him being charged under Dutch anti-hate laws – he will stand trial in October – and at one stage being refused entry to the UK, though a court overturned this. Speaking about the UK yesterday, Wilders said his nascent organisation, dubbed the Geert Wilders International Freedom Alliance, would try to occupy the space between the Conservatives and the BNP, which he said was “racist” and “not my party”. Wilders is often described as far-right but frequently stands up for gay and women’s rights. Reacting to Wilders yesterday, Ayhan Tonca, a well-known spokesman for Dutch Muslims, said he feared Wilders would meet with success as he spread his Islamophobic message. “So long as things are going badly with the economy, a lot of people always need a scapegoat,” he said, calling on “well-meaning people in Europe to oppose this”. http://www.thefirstpost.co.uk/65989,news-comment,news-politics,geert-wilders-to-take-anti-islam-party-global#ixzz0ts3DxUi1