Morris - a Fox News political painted lady who lambastes health care and other Democratic initiatives with a sniffy air of comprehensive wisdom - knows hooking well, according to the New York Times in 2007: 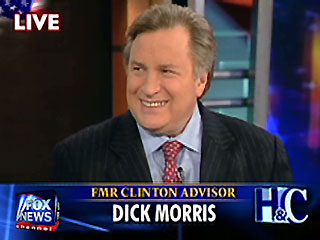 FOX News pundit Dick "Toe Sucker" Morris may still be up to his old tricks. According to the New York Times, Morris has been named by DC Madam Deborah Jeane Palfrey as one of her clients. The Times reports:

Dick Morris, the television commentator and former adviser to President Bill Clinton, who resigned in 1996 after reports that he was seeing a prostitute, was also a customer, Ms. Palfrey’s lawyer has said in court.